Days of Our Lives Spoilers: Marlena Rushed to the Hospital – John Fears for His Love After Diana’s Attack 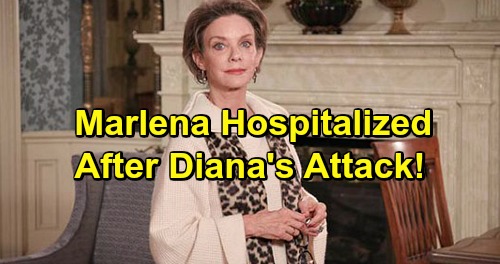 Days of Our Lives (DOOL) spoilers tease that Dr. Marlena Evans (Deidre Hall) will suddenly find herself in danger. DOOL fans know Marlena isn’t happy about Leo Starke’s (Greg Rikaart) drama. She has a close bond with her grandson, Will Horton (Chandler Massey), so she can’t stand anyone who makes him suffer.

Will and Sonny Kiriakis (Freddie Smith) could be looking at serious jail time if they can’t get a grip on this mess. To make matters worse, Diana Cooper (Judith Chapman) claims Leo is John Black’s (Drake Hogestyn) son. Victor Kiriakis (John Aniston) just brought Marlena in the loop on the paternity shocker, so she’ll need answers from John next week.

Once Marlena and John work through their issues, Diana will be livid. She felt like this might be enough to destroy Marlena and John’s bond or at least crumble it a bit. When they remain a united front, Days of Our Lives spoilers say Diana will kick her scheme up a notch. She’ll realize she may have to resort to a more violent way of dealing with the problem.

That could be why Marlena lands in the hospital during the week of March 11-15. She’ll be rushed in for treatment, so that could be the result of Diana’s handiwork. What will be the reason Marlena is admitted? Will Diana attack her from behind or perhaps try to poison her?

Regardless, Marlena should be suspicious of Diana once she’s recovering. It hasn’t been that long since Days did a big coma storyline for Marlena. It’s doubtful they’ll do another one right now, so Marlena should be on the mend soon after this incident. She may determine that Diana is a bigger threat than any of them thought. Diana is even more ruthless than Leo – and that’s saying a lot!

Days of Our Lives spoilers state that Marlena and John will have to stick together. Maybe they’ll come up with a plan to dupe Diana. John might have to pretend he wants his former flame back. Marlena could even fake her death if it come to that. The priority will be keeping their family safe, which means taking down both Diana and Leo.

It sounds like some crazy episodes are in store. We’ll give you updates as other Days news comes in. Stay tuned to DOOL and don’t forget to check CDL often for the latest Days of Our Lives spoilers, updates and news.