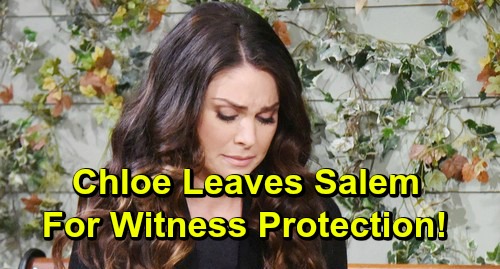 Days of Our Lives (DOOL) spoilers tease that Chloe Lane (Nadia Bjorlin) will soon be alarmed to find out that she’s got someone following her. Of course, she was recently nearly gunned down by El Fideo’s (Andoni Gracia) men, so she’s still reeling from that. But now it seems that someone else will be after her.

Chloe will get the feeling that she’s being watched, and some time later Rex Brady (Kyle Lowder) will confront a man carrying a gun who seems be following Chloe. It looks like the man will escape Rex’s clutches, but at least it will serve as some verification that Chloe’s feeling of being watched is spot on.

Of course, Chloe is currently safe staying with Stefan DiMera (Tyler Christopher) at the DiMera mansion, but that’s only in the evenings and on weekends when Chloe’s at the mansion. Chloe works during the day and she’s away from the house, which gives a stalker plenty of opportunity to menace her.

And that’s not even considering Chloe’s kids, who may be at risk from the stalker, too. Of course, stalkers are notoriously difficult to eliminate, since the police can’t really do anything about them until they overtly threaten or harm someone. It’s very possible that Chloe will decide to pack up and leave Salem for parts unknown…and far away from her Salem stalker.

If that happens, then Chloe might not even share with anyone where she’s going. It could be like a witness-protection type of situation, where Chloe and the kids simply vanish without a trace and no one knows where they are.

Do you think that Chloe’s stalker will drive her out of Salem? Stay tuned to DOOL and don’t forget to check CDL often for the latest Days of Our Lives spoilers, updates, and news.