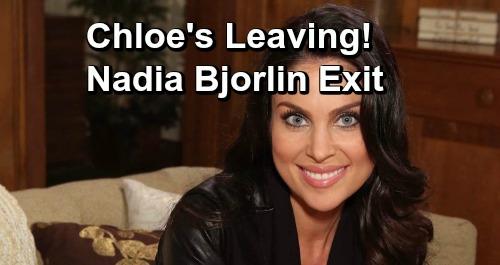 Days of Our Lives (DOOL) spoilers reveal that some cast cuts are coming up at the NBC soap. Nothing’s been officially confirmed, but a social media insider has the hot scoop. This person has leaked DOOL spoilers before that turned out to be 100-percent accurate.

For example, this leaker knew Chad DiMera (Billy Flynn) and Abigail Deveraux (Kate Mansi) would name their baby Charlotte DiMera. He or she also spilled that Kristen DiMera (last played by Stacy Haiduk) would be recast. Soon after, the news broke about Haiduk taking over Eileen Davidson’s role.

This insider teased info about Steve Johnson’s (Stephen Nichols) bionic eye and Dr. Marlena Evans’ coma after the wedding, too. As you can see, he or she’s got a great track record. There’s a good chance the latest leaks are solid as well. If so, Nadia Bjorlin (Chloe Lane) is likely headed out the door.

It makes sense considering Days can never seem to use Chloe properly. Bjorlin is a fabulous actress and is liked by many DOOL fans. Unfortunately, it’s rare for Chloe to get a big storyline. Whenever she does get one, it tends to fizzle quickly. Chloe also usually ends up in pairings that just aren’t meant to last.

The idea of “use ‘em or lose ‘em” is the norm in the soap world. There’s no point in paying Bjorlin a boatload of money if Chloe’s just going to meander around Doug’s Place. To be fair, Chloe does have something more exciting than usual coming up. However, it probably won’t take long for it to be resolved.

Chloe’s pairing with Lucas (Bryan Dattilo) was a flop, so few were heartbroken when they parted ways. Her next romance may not really work out either. Days of Our Lives spoilers say Chloe will be thrown into Stefan DiMera’s (Tyler Christopher) orbit. He’ll come to Chloe’s rescue after someone plots to avenge Mateo aka El Fideo’s (Andoni Gracia) death.

That could stir up some complex feelings, but other Days spoilers suggest that Stefan may marry Gabi Hernandez (Camila Banus) down the road. Plus, there’s the chemistry issue to consider. Bjorlin and Christopher have sparkled in previous scenes together. People started rooting for a Chloe and Stefan pairing during Christopher’s first couple weeks on the show.

Since we know Brandon Barash (ex-Johnny Zacchara on General Hospital) will make his onscreen debut soon, the magic may not be recreated. It’s tough to say if Barash’s version of Stefan will have the same luster with Chloe. Chemistry can be a tricky thing on soaps!

Regardless, it looks like the decision to cut Chloe is a recent one. That means there are no hints about Chloe’s exit storyline just yet. The Mateo material should be wrapped up several months prior, so DOOL will need something else.

Update: Nadia Bjorlin has confirmed her exit from Days of Our Lives – see below.

Oh, I nearly made it as a master of soaps… #sandymeisner #19years #dool …….Thank you @nbcdays for the memories. #andthecurtainfalls #farewell 🍸