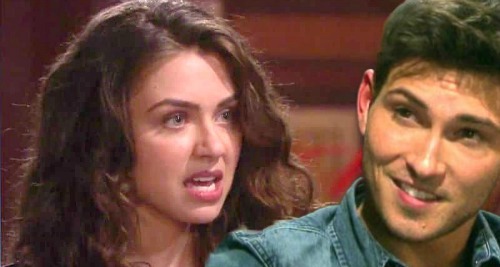 Days of Our Lives (DOOL) spoilers reveal that the pre-nominations are out this year’s Daytime Emmys. Naturally, several DOOL stars scored pre-noms for their fantastic work. Many Days viewers have been praising all the favorites on social media, but there was one noticeable actor left off the list.

In a surprising snub, Robert Scott Wilson didn’t receive a pre-nomination for the role of Ben Weston. He’s been crushing it ever since he made his Days of Our Lives comeback, so this omission has left plenty of people scratching their heads. There other DOOL actors who could be considered snubbed, but this one is perhaps the most scandalous.

Ben’s pairing with Ciara Brady (Victoria Konefal) rose to popularity almost immediately. From the moment fans got their first taste of “Cin,” they were hooked. That’s because of the sizzling chemistry Konefal and Wilson bring to the table as well as their talent.

That talent was on full display in the cabin scenes where Ben slipped back into insanity. Without his meds, Ben had to rely on Ciara’s growing trust to get him through the ordeal. Those were Wilson’s best scenes, so he undoubtedly used him for his reel. It’s strange that the Daytime Emmys refused to recognize what a great performance he delivered.

Of course, it’s possible Wilson submitted in the lead actor category and didn’t quite make the cut. That’s a harder category to break into than the one for supporting actor, but it’s perplexing either way. Why? Because of some the other Days actors who were pre-nominated. Let’s take a look at the list so you can see for yourself.

Hogestyn is a no-brainer thanks to his fantastic work after Dr. Marlena Evans’ (Deidre Hall) shooting, but Wilson was certainly on par with Christopher, Nichols and Flynn this year. He deserved a pre-nom just as much or more.

If Wilson submitted for Outstanding Supporting Actor in a Drama Series, we’d say the same thing. Greg Rikaart received a pre-nomination for his role as Leo Starke and Christopher Sean got one for playing Paul Narita.

Eric Martsolf also received a pre-nom for portraying Brady Black. Again, Wilson was just as good or better – especially since he was given material that was arguably more gripping than certain costars.

Naturally, we’re not taking anything away from the other awesome actors on this list. They earned their pre-noms and it’s always nice to see Days of Our Lives stars get them.

Still, it’s hard to ignore an omission this glaring. There had to be room for Wilson somewhere! Alas, it just didn’t pan out.

Wilson didn’t come right out and address the snub, but he did make a classy statement to congratulate his costars. He said, “Congrats to my @nbcdays fam on all their prenominations for this years #DaytimeEmmys !! I see the layered work that’s put in on the daily, so there’s nothing better than to see my team shine…Now back to work!”

Congrats to my @nbcdays fam on all their prenominations for this years #DaytimeEmmys !! I see the layered work that’s put in on the daily, so there’s nothing better than to see my team shine✨…Now back to work!
🎬🚬 #days