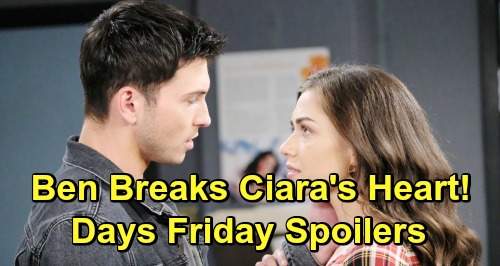 Days of Our Lives (DOOL) spoilers for Friday, March 1, tease that Haley Chen (Thia Megia) will worry about her future. She’s terrified about the possibility of being deported, so she’ll need someone to lend an ear. Thankfully, Dr. Kayla Johnson (Mary Beth Evans) will support Haley and let her know it’s going to be OK.

Of course, Haley won’t be sure she believes that. She’ll still be reeling from JJ Deveraux’s (Casey Moss) betrayal and the consequences of Jack Deveraux’s (Matthew Ashford) public admission. Haley will just hope she can find a way to stay in the U.S. and keep the life she’s built intact.

In the meantime, JJ will continue to pay the price for spilling the beans. Days of Our Lives spoilers say Eli Grant (Lamon Archey) and Lani Price (Sal Stowers) will show up in Friday’s DOOL episode. They’ll want to ask JJ a few questions about Haley and try to figure out where she’s dashed off to.

JJ doesn’t know and he wouldn’t tell them even if he did. He’ll do his best to defend Haley and keep her out of trouble, but he’ll know this is bad. Across town, Days spoilers state that Tripp Dalton (Lucas Adams) will discover something surprising. He’ll be shocked by what he pulls out of Claire Brady’s (Olivia Rose Keegan) jewelry box, so he’ll demand an explanation.

Will Tripp find the lighter Claire used to torch the cabin? Could it be something else that points to Claire’s guilt instead? Regardless, Claire should be able to talk her way out of this for now. She’s pretty convincing when she needs to be – especially when her freedom is on the line.

Other Days of Our Lives spoilers say Ben Weston’s (Robert Scott Wilson) fears will grow stronger. Jordan Ridgeway (Chrishell Hartley) made her position on Ben’s mental health perfectly clear. She doesn’t think he’s capable of change, so her view will really start to weigh on Ben. Jordan was crazy herself, but that won’t matter. This is someone Ben listened to and counted on for many years.

Ben nearly killed Jordan in their last confrontation, so that’ll be another reason for what he does next. He’ll be concerned about the threat he poses to Ciara Brady (Victoria Konefal), so he’ll decide to break things off. He’ll dump Ciara to protect her, but you can bet she’ll put up a fight.

Unfortunately, Ben will stick to his new plan and leave Ciara heartbroken. It sounds like Ciara will just have to prove to Ben that he’s truly reformed! We’ll give you updates as other Days news comes in. Stay tuned to DOOL and don’t forget to check CDL often for the latest Days of Our Lives spoilers, updates and news.