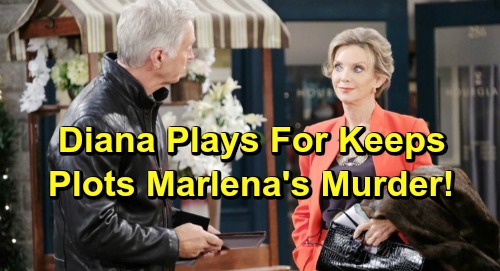 Days of Our Lives (DOOL) spoilers tease that Diana Cooper (Judith Chapman) will have to shift her strategy. She won’t be happy when Dr. Marlena Evans (Deidre Hall) proves to be her usual understanding self. Despite Marlena’s complaints about John Black’s (Drake Hogestyn) secret-keeping, she’ll get why he kept his mouth shut about Diana’s paternity claims.

During the week of March 4-8, Marlena and John will tackle their problems head-on. These two have been through too much to run when issues arise. Marlena will simply call John out for deceiving her and find a way to work through her pain. John will undoubtedly be apologetic. It’s not like he’s trying to hurt Marlena by keeping his mouth shut. In fact, John believes he’s protecting her.

Days of Our Lives spoilers state that John and Marlena will work things out quickly. Marlena will push John to see that Diana could easily be lying about Leo’s paternity. However, she’ll assure John that they can get through this no matter what. It’s not like they haven’t dealt with long-lost kid drama before. Paul Narita (Christopher Sean) was another son that came out of nowhere.

Still, John and Marlena will get a DNA test cooking and hope for the best. When Marlena runs into Diana, Days spoilers say she’ll make herself crystal clear. Marlena will likely know what Diana’s trying to do here. She’ll suspect this is a ploy to win back John, so she’ll warn that it’s not going to happen.

Marlena will indicate that she’s already worked through everything with John. She may argue that they’ll accept Leo as part of the family if need be. Days of Our Lives spoilers state that Marlena will take a firm stance on her marriage. She’ll make Diana see that it’s going to take a lot more than dirty tricks to tear “Jarlena” apart.

After this confrontation, DOOL fans can expect a fuming Diana to brainstorm. It won’t be long until she reaches a shocking conclusion. Diana will determine that if she wants John, she has to truly eliminate the competition. She’ll see that Marlena has to be taken out of the picture permanently.

That certainly sounds like a deadly plan to us! Days spoilers suggest that Diana just might plot Marlena’s murder! There’s no way she’ll succeed, but she could still cause quite a crisis. We’ll give you updates as other news comes in. Stay tuned to DOOL and don’t forget to check CDL often for the latest Days of Our Lives spoilers, updates and news.