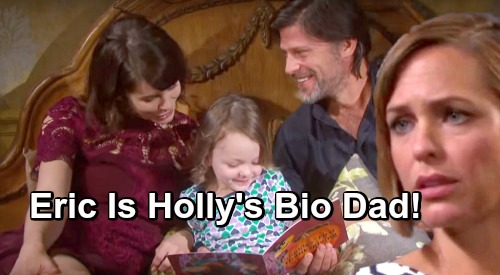 Days of Our Lives (DOOL) spoilers tease that Nicole Walker (Arianne Zucker) will return starting April 25, so that’s sure to shake things up for Eric Brady (Greg Vaughan). He’s currently struggling with feelings for Sarah Horton (Linsey Godfrey), and her love’s growing as well. Since Eric’s brother wants to marry Sarah, that makes this a mess that’ll get messier.

Rex Brady (Kyle Lowder) will push Sarah to accept that she’s the only woman he wants. He’s promised not to cheat again, but that’s an issue that may remain on Sarah’s mind. Of course, Eric will be the real hurdle. It looks like Sarah will eventually dump Rex and get together with Eric – just in time for Nicole’s comeback!

However, Nicole’s survival may not even be the biggest shocker. There could be other major bombshells, including one that would give Nicole a huge advantage over Sarah. Let’s consider how this might play out. For starters, Days of Our Lives spoilers say Nicole’s absence will be explained. We’ll learn how Nicole escaped that cabin fire and where she’s been all this time.

If Nicole faked her death by choice, that could leave Eric hurt. He may lean on Sarah as he deals with Nicole’s betrayal. Nicole could end up pining for Eric, but she can focus on getting Holly Jonas (Harlow and Scarlett Mallory) in the meantime. Maybe Holly is why Nicole will change her mind and decide she just can’t stay away.

Days already went down the custody battle road with Chloe and Nicole once before. We also saw a custody battle over Tate Black (Colin and Kyle Schroeder) and a dropped one over Holly recently. DOOL may not want to get too repetitive since custody wars tend to be a snoozefest anyway. As a result, Nicole could get Holly back quickly. Chloe may see that Holly belongs with her true mother.

Where does Eric fit in here? He loves that little girl and desperately wanted to raise her as his own daughter. In fact, Days of Our Lives has pushed that angle so much that we have to consider something. Could Eric be Holly’s biological father? It sounds crazy, but there could actually be a very logical explanation.

Back when Chloe’s surrogacy storyline was revealed, we saw some crucial flashbacks to explain everything. Daniel Jonas (Shawn Christian) and Nicole were eager to become parents with Chloe’s help. Just before Chloe’s insemination, the doctor was delayed briefly and explained that a drunk man was causing a scene.

That line seemed like a setup in case Days ever wanted to do a paternity switcheroo. Why? Because Eric had a serious drinking problem, which ultimately led to the New Year’s Eve crash that killed Daniel. What if Eric was stalking Nicole and doesn’t remember drunkenly swapping the sample for his own? He may have even been trying to earn money for booze with sperm donations.

Days of Our Lives spoilers say they’d have the perfect strategy to push Nicole and Eric back together. Perhaps some health crisis could tip them off to Holly’s true paternity. Eric may have to step up and save Holly’s life.

Could Holly and the promise of a united family bring an “Ericole” reunion? We’ll give you updates as other news comes in. Stick with DOOL and don’t forget to check CDL often for the latest Days of Our Lives spoilers, updates and news.