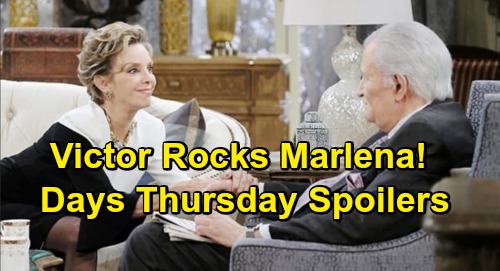 Days of Our Lives (DOOL) spoilers for Thursday, February 28, tease that Gabi Hernandez (Camila Banus) will provoke Stefan DiMera’s (Tyler Christopher) wrath. He recently announced that he was firing Gabi and doing away with Gabi Chic. With Chad DiMera (Billy Flynn) out of the way, Stefan believed there was nothing to stop him.

However, Gabi will return to Stefan after taking Brady Black’s (Eric Martsolf) advice. She’ll reveal that she went to the board behind his back and secured her rightful place at DiMera. Gabi will gloat about how the board views her company as a true asset. Since this brand is her baby, they certainly couldn’t let Gabi go. Gabi Chic without Gabi is just…Chic.

Days of Our Lives spoilers say Stefan will rage over Gabi’s sneaky move. He’ll wish he could undo this reinstatement, but he’ll be out of luck. Gabi will make it clear that Stefan’s not as powerful as he thinks he is. They’ll get into a heated argument, but Chloe Lane (Nadia Bjorlin) will break things up. She may scold Stefan and Gabi for behaving more like children than the kids living upstairs.

Other Days spoilers say Victor Kiriakis (John Aniston) will keep his end of the bargain. He just made a deal with Diana Cooper (Judith Chapman), which will bring pain now and hopefully peace later. If Diana can clean up this Leo Stark (Greg Rikaart) mess like she claims, Victor will do whatever he has to do.

Of course, Victor won’t be the one affected by this deal. That would be Dr. Marlena Evans (Deidre Hall)! Days of Our Lives spoilers say Victor will do what he’s told and deliver a bombshell. It appears Victor will either pass along Leo’s paternity shocker or hint that John Black’s (Drake Hogestyn) keeping a massive secret. Regardless, Marlena will confront John about what he’s keeping from her on next week’s new Days episodes, March 4-8.

In the meantime, DOOL fans can probably expect Sonny to seek answers. He overheard part of Diana and Victor’s conversation, so he knows a plan’s cooking. Sonny will get that it’s risky and could cause more drama, but he’s just as desperate as Victor is. It sounds like he’ll talk to Victor and agree they have to do whatever it takes.

Days spoilers state that some twists are brewing in this storyline. Diana is most likely lying about Leo’s paternity, so her scheme should blow up down the road. We’ll give you updates as other news comes in. Stay tuned to DOOL and don’t forget to check CDL often for the latest Days of Our Lives spoilers, updates and news.