BY Heather Hughes on May 2, 2019 | Comments: 2 comments
Related : Days of Our Lives, Soap Opera, Spoiler, Television 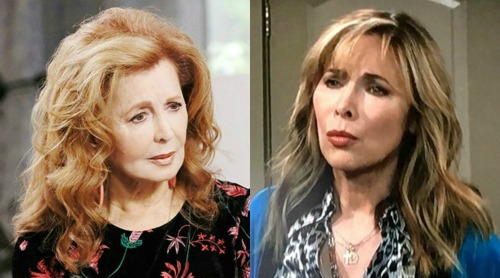 Days of Our Lives (DOOL) spoilers tease that Holly Jonas’ (Harlow and Scarlett Mallory) kidnapping will leave everyone on edge. Nicole Walker’s (Arianne Zucker) fear has already been coming out as anger, but she won’t be the only one lashing out. It turns out Victor Kiriakis (John Aniston) will have something to say, too. He’ll hold Nicole responsible for the mess her beloved daughter’s in.

Victor might suggest that if Nicole hadn’t cheated on Brady Black (Eric Martsolf), she’d have a happy family with him right now. Brady blackmailed Nicole into leaving town and things went downhill from there. Of course, it’s not Nicole’s fault that Holly was kidnapped from the DiMera mansion. It isn’t Brady’s fault either, but he’s at least more to blame than Nicole is.

Nevertheless, Days spoilers state that Victor will rant about Nicole’s actions. He may or may not gripe to Nicole’s face, but Victor will make it clear to someone where he stands. If Maggie Kiriakis (Suzanne Rogers) hears about this, she’s sure to be furious. Maggie loves Nicole and knows this isn’t the time to be making her feel worse.

However, Victor may stand by his accusations after Holly’s presumed death. Holly won’t be gone for good, but Nicole and everyone else who loved her won’t know that. DOOL fans may recall that Daniel Jonas (Shawn Christian) was Victor’s godson. He’ll naturally be upset to learn Daniel’s little girl didn’t survive.

Days of Our Lives spoilers say Kate Roberts (Lauren Koslow) will be a source of comfort for Victor. It won’t be long until Maggie walks in on them looking cozy. Between Holly’s “death” and her growing jealousy, Maggie will be tempted to hit the bottle again. Her old battle with alcoholism could come roaring back if she isn’t careful.

Kate will feel drawn to Victor as he shows his emotional side. She may take advantage of the strife between Maggie and Victor in the coming weeks, so that could obviously spell trouble. Days of Our Lives spoilers say Maggie and Victor should fix their marriage eventually, but Kate may do some serious damage first!

It sounds like some gripping scenes are on the way. We’ll give you updates as other Days news emerges. Stick with DOOL and don’t forget to check CDL often for the latest Days of Our Lives spoilers, updates and news.