Days of Our Lives Spoilers: Kristen Betrays Lani for Her Own Good – Exposes Gabi’s Plot to Eli, Repays Lani for Saving Her Life? 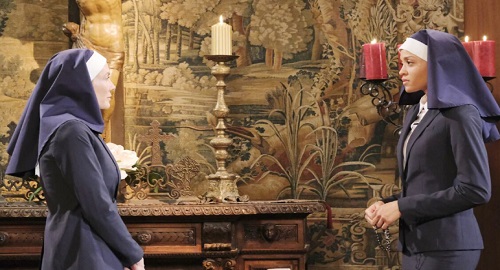 Days of Our Lives (DOOL) spoilers tease that Kristen DiMera (Stacy Haiduk) will soon owe Lani Price (Sal Stowers) her life. After Eli Grant (Lamon Archey) heads to Rome, JJ Deveraux (Casey Moss) will be hot on his trail. Eli will be trying to prevent Chad DiMera’s (Billy Flynn) attack on Gabi Hernandez (Camila Banus), but JJ will just hope this could somehow lead him to Kristen.

Since Lani and Kristen’s convent happens to be in Rome, JJ’s hunch will be correct. He’ll end up coming face to face with Kristen eventually, which will lead to some harsh words and a drawn gun! JJ’s been in a lot of pain since Haley Chen (Thia Megia) died, so he’s in bad shape. He just isn’t thinking clearly – and the drugs he’s hooked on aren’t helping.

Thankfully, Days of Our Lives spoilers say Lani will arrive to save the day. She’ll intervene after she finds JJ on a mission to murder Kristen. Lani’s come to think of Kristen as a friend during their time at the convent, so she certainly won’t want to see her die.

Plus, Lani knows first-hand what it’s like to kill someone. Even though Stefan DiMera’s (Brandon Barash) death was an accident, it’s something that haunts Lani for many reasons. Everything changed for the worse thanks to that fateful moment. There’s no putting the bullet back in the gun, so Lani may warn JJ not to ruin his life.

Days of Our Lives spoilers say Lani will deliver an emotional plea during the week of December 9-13. She’ll beg JJ to let Kristen live, so he’ll hopefully lower his weapon. This is obviously a huge save on Lani’s part, so how will Kristen repay the favor? Could she decide to tell Eli the truth about why Lani dumped him at the altar?

Lani doesn’t seem interested in doing it herself, so Kristen might betray Lani’s trust for her own good. She may want to give Lani and Eli the happiness they deserve. Days spoilers say Eli will have to find out somehow, so it makes sense for Kristen to come clean. There’s surely a reason DOOL let Lani confide in Kristen, and that could be it. Kristen just might be the perfect person to expose Gabi’s plot!

Some hot drama’s brewing on the NBC soap, so stay tuned. We’ll give you updates as other Days news comes in. Stick with DOOL and don’t forget to check CDL often for the latest Days of Our Lives spoilers, updates and news.