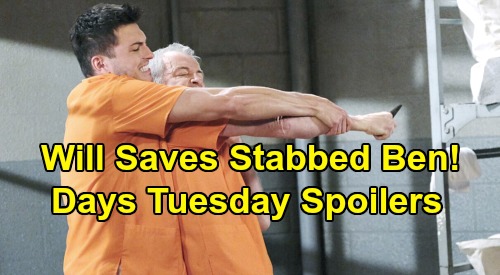 Days of Our Lives (DOOL) spoilers for Tuesday, December 3, tease that Ben Weston (Robert Scott Wilson) will continue to struggle with his father. Clyde Weston (James Read) was about to stab Will Horton (Chandler Massey) when Ben returned to his cell, so Ben immediately came to Will’s rescue. Unfortunately, Clyde’s a man on a mission! It’ll take some work on Ben’s part to keep Clyde from trying again.

At some point during this altercation, Clyde’s shiv will plunge into Ben’s abdomen. He might be a little sorry about that since Ben’s his son, but he may also argue that Ben deserved it. Clyde isn’t someone who appreciates it when anybody gets in his way.

Days spoilers say Ben will get some help from Will, who’ll take off his shirt to stop the bleeding. He’ll hope to control it until Ben can make it to the infirmary and get patched up. Ben’s going to be just fine, but his legal issues will likely get worse due to this prison fight. It’s doubtful anyone in charge will care that it wasn’t Ben’s fault. As for Clyde, he’ll be thrown back in solitary confinement soon enough.

Thankfully, Ciara Brady (Victoria Konefal) is making progress in her search for answers. She just whipped out a drill and intends to use the skills she learned in shop class. Days of Our Lives spoilers say Ciara will open up Xander’s metal box, but will any proof be inside? Regardless, Ciara will keep working hard to free Ben before it’s too late.

Other Days of Our Lives spoilers state that Nicole Walker (Arianne Zucker) will seek forgiveness. She’ll make an emotional plea to Eric Brady (Greg Vaughan), but he may not be willing to let it go – at least not right now. Nicole and Eric should heal their relationship eventually, but they have to rebuild the trust that’s been shattered first.

At Rafe Hernandez’s (Galen Gering) place, Evan Frears (Brock Kelly) will open the door to find Sonny Kiriakis (Freddie Smith). After Sonny hands over a scarf Evan left behind at the Thanksgiving gathering, Evan will invite him in for a slice of pie. DOOL spoilers say they’ll share some nice moments until Rafe interrupts, but Evan will still manage to steal a kiss before Sonny goes.

Sonny will let Evan know he’s flattered, but he’s just not ready for a new romance. Things may be strained with Will, but Sonny’s still married. He’ll choose to stand by his husband for the time being. It sounds like another great episode’s coming up. We’ll give you updates as other Days news emerge. Stay tuned to DOOL and don’t forget to check CDL often for the latest Days of Our Lives spoilers, updates and news.