Days of Our Lives Spoilers: Evan Pulls Sonny Into A Kiss – Kate Accuses Him Of Cheating On Will

BY hellodrdavis on December 2, 2019 | Comments: one comment
Related : Days of Our Lives, Soap Opera, Spoiler, Television 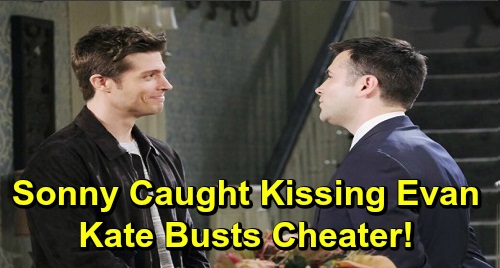 Days of Our Lives (DOOL) spoilers tease that Sonny Kiriakis (Freddie Smith) is really going through a tough time. His husband Will Horton (Chandler Massey) is currently in prison for killing his mother Adrienne Kiriakis (Judi Evans) and the two seem to really be on the outs. In fact, Will has even told Sonny not to come visit him in prison anymore, and Sonny seems to be obliging. This has all resulted in Sonny being terribly lonely and lost without any real companionship.

But then someone new suddenly came into Sonny’s life – Evan Frears (Brock Kelly), the new nanny hired by Rafe Hernandez (Galen Gering). Evan is a hot guy and he seems to have taken a quick interest in Sonny. The two shared a meal together in Horton Square recently, and they seem to have more than just a fleeting interest in each other. They get along well and share easy conversation together.

Well, it seems that soon, Evan will push for a bit more in their relationship. According to Days of Our Lives spoilers, Evan and Sonny will spend some more time together in the near future, and Evan will ultimately pull Sonny into a big kiss. And at that point, it should become crystal clear to Sonny that Evan wants more than just friendship. And that will probably cause a bit of tension for Sonny.

After all, Sonny is still married to Will, and even though Will’s in prison and the two seem to be pretty estranged right now, Sonny will probably still feel guilty about the kiss at some level. The kiss might just get Sonny to start contemplating whether he wants to stay in a marriage with the person who killed his mother, especially when he could be leading a happier life with someone new.

As DOOL viewers know, Kate is very close with Will, and she’s one of her grandson’s biggest champions. Although DOOL viewers don’t yet know all the circumstances surrounding the accident that took Adrienne’s life, Kate has stated to Will that what he did was an accident, and that she strongly believes that Sonny will forgive him for it.

So she’ll be livid when she learns that Sonny has kissed another guy while Will sits in prison. According to DOOL spoilers, she’ll accuse Sonny of cheating on Will, and Sonny will then probably feel like he has a lot of explaining to do, including how he didn’t initiate the kiss with Evan. Still, Kate’s not going to like the whole situation, and Sonny will surely get an earful.

It will be interesting to see what happens between Sonny and Evan going forward, especially since Kate will be against them spending any time together. Do you think that Kate will try to sabotage Sonny’s burgeoning relationship with Evan? Stay tuned to DOOL and don’t forget to check CDL often for the latest