Days of Our Lives Spoilers: Ben’s Fierce Fight for Life – Ciara’s Desperate Plea to Save Love From Lethal Injection 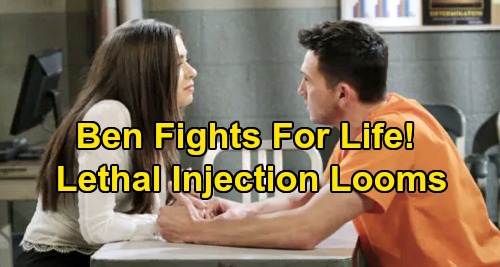 Days of Our Lives (DOOL) spoilers tease that Ciara Brady (Victoria Konefal) will hope for the best as the day of Ben Weston’s (Robert Scott Wilson) final appeal arrives. Ben’s previous lawyer didn’t think Ben had a shot at winning, so he dumped his client to devote his time to other cases. That says a lot about what Ben’s up against!

Ciara convinced Justin Kiriakis (Wally Kurth) to step up as Ben’s attorney, but Justin warned there are no guarantees. He realizes there may not be much he can do without new evidence. Ciara will work hard to find that new evidence before Ben’s appeal date, but she may not have much luck. Xander Kiriakis (Paul Telfer) and Victor Kiriakis (John Aniston) are suspicious of Ciara’s true motives, so it’s doubtful she’ll be able to make progress now.

Ben’s fate may lie in Justin’s hands during the week of December 30-January 3. Justin admitted Ben wouldn’t be his first choice as a love interest for Ciara, but he’s someone who believes in justice. If Ben is innocent of killing Jordan Ridgeway (Chrishell Stause), Justin certainly doesn’t want him to die. He’ll fiercely defend Ben, but Ben’s best shot at winning his appeal may come through his true love.

Days of Our Lives spoilers say Ciara will support Ben with everything she’s got. It sounds like she may have a chance to speak on Ben’s behalf and deliver a desperate plea to save him. Ciara can’t bear the thought of Ben facing a lethal injection. She adores Ben and wants a future together, but that can’t happen if he’s dead and buried.

However, Ben’s last appeal probably won’t work out as well as he hopes. After all, it wouldn’t be much of a story if Ben just walked free. Where’s the drama in that? Days fans need to see things really come down to the wire! Ben should have his sleeve rolled up and be within seconds of facing a fatal needle. That would be more in line with DOOL Head Writer Ron Carlivati’s style.

If we go by the soapiest outcome, Ben may not score his freedom until Ciara bursts in with proof at the last possible second. Fortunately, Days of Our Lives spoilers say Ben isn’t going to die, so everyone can relax and just let the chaos play out. We’ll give you updates as other Days news comes in. Stay tuned to DOOL and don’t forget to check CDL often for the latest Days of Our Lives spoilers, updates and news.