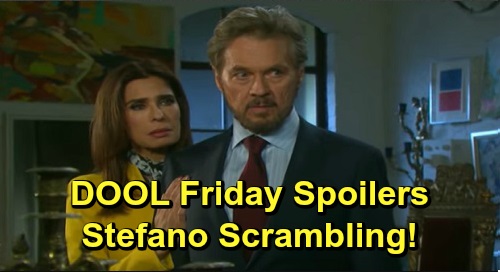 Days of Our Lives (DOOL) spoilers for Friday, December 20, tease that Stefano DiMera aka Steve Johnson (Stephen Nichols) will make it to Kate Roberts’ (Lauren Koslow) room at the pub. He can’t hide out at the secret lair anymore, so he needs a new place to hole up. Once Stefano and Kate settle in, it looks like things will take a passionate turn. They’ll end up in bed together, but that’ll become a problem when Roman Brady (Josh Taylor) knocks on Kate’s door.

Stefano will scramble to hide while Kate covers up all signs that he was there. However, she’ll miss at least one. Days of Our Lives spoilers say Roman will discover a man’s shoe, so he’ll start putting the puzzle pieces together. Between that and Kate trying to get rid of him, he’ll realize she must have new hunk she’s bedding.

DOOL fans can expect Roman to be curious, but Kate obviously won’t let him know Stefano’s in there. She may just ask Roman to respect her privacy and leave. After all, Kate doesn’t owe Roman any explanations about her love life – which is clearly about to get messy!

As for Stefano, he’ll get a shocking visitor of his own later. It’ll be interesting to see how Stefano handles the next round of drama. Over with Gabi Hernandez (Camila Banus), she’ll get a phone call that catches her off guard. Days of Our Lives spoilers say Kristen DiMera (Stacy Haiduk) will reach out to Gabi with a sneaky goal in mind. She’ll take the first step toward a fake alliance with the woman she wants to destroy.

Of course, Lani Price (Sal Stowers) will be in on this plot as well. She’ll have even more of a motive to take Gabi down and finally make her pay all the things she’s done. Gabi will be suspicious thanks to Kristen’s phone call, but Days viewers know Kristen can be pretty crafty. She’ll hope to convince Gabi that she’s not friends with Lani and has no interest in helping her.

Kristen will deliver an intriguing offer, so Gabi will have to decide if Kristen can be trusted. Meanwhile, Abigail DiMera (Kate Mansi) won’t think Eli Grant (Lamon Archey) trusts Gabi either – at least not as much as he should. She’ll express doubts about Eli’s feelings for Gabi, but he’ll undoubtedly claim he loves her. In reality, Eli seems to be trying to fill the void Lani left in his heart.

It sounds like another great episode’s on the way. We’ll give you updates as other Days news comes in. Stay tuned to DOOL and don’t forget to check CDL often for the latest Days of Our Lives spoilers, updates and news.