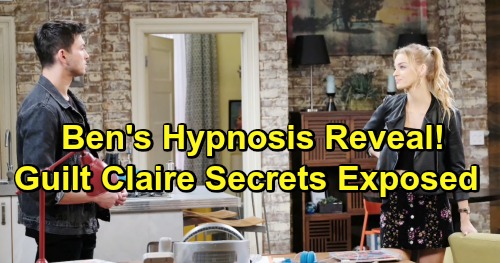 Days of Our Lives (DOOL) spoilers tease that Ben Weston (Robert Scott Wilson) will face a familiar predicament. Hope Hernandez (Kristian Alfonso) hasn’t exactly warmed up to Ben, but she’s treating him a lot better than she used to. There was a time when Hope was obsessed with taking Ben down for the cabin fire. As Salem’s police commissioner, Hope made it her mission to lock Ben up.

Hope thankfully backed off, but there’s a new commish in town! Eve Donovan (Kassie DePaiva) will take over the position after Jack Deveraux (Matthew Ashford) appoints her. The first item on her agenda will be framing Ben for that blaze. Eve knows Claire Brady (Olivia Rose Keegan) was the true fire-setter, but she’ll be far more interested in letting Ben take the fall for it.

Hope’s motive was protecting her daughter, but Eve’s motive will be seeking justice for her own. Paige Larson’s (True O’Brien) murder changed Eve’s world forever, so now she’ll want to change Ben’s. Days of Our Lives spoilers say Eve won’t rest until Ben’s behind bars. She’ll desperately want revenge to fill the void that’s still in her heart.

It won’t take Ben long to realize Eve is gunning for him. Eve’s slap in the square should be a huge warning sign! She’ll make it clear that he’s a target, so Ben will know what he has to do. He’ll plan to prove who actually started the fire in hopes of getting off the hook.

After Ciara Brady (Victoria Konefal) gets updates, she’ll follow the clues along with Ben. He’ll suggest that Claire may be to blame, which should leave Ciara with mixed feelings. Ciara won’t want to believe Claire’s capable of trying to kill her, but DOOL fans know Claire’s behavior has been rather unhinged lately. Ciara will have to acknowledge that, too.

Days of Our Lives spoilers hint that Ben may eventually hit a dead end. This is something that’ll be hard to prove, so Ben will struggle to figure out his next move. However, Ben will finally settle on a way out of this mess. He’ll come up with a tactic that could turn up some new evidence.

Ben just has to remember the details of that fiery ordeal and hopefully pinpoint something important. During the week of May 27-31, Days spoilers say Ben will recruit Dr. Marlena Evans (Deidre Hall) for his goal. She’s hypnotized him before, so Ben will ask Marlena to do it again. Ben will believe a hypnosis session might be the key to cracking the tricky case.

Will Ben recall something surprising thanks to Marlena’s efforts? Will he get a step closer to proving Claire tried to kill Ciara? We’ll keep you posted as other Days news comes in. Stay tuned to DOOL and don’t forget to check CDL often for the latest Days of Our Lives spoilers, updates and news.