BY Heather Hughes on May 18, 2019 | Comments: 2 comments
Related : Days of Our Lives, Soap Opera, Spoiler, Television 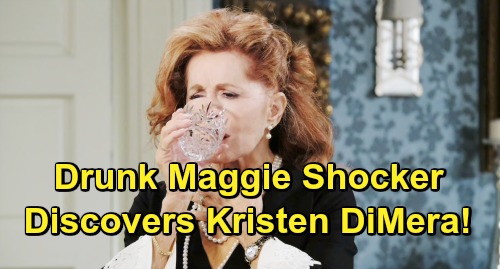 Days of Our Lives (DOOL) spoilers tease that Maggie Kiriakis (Suzanne Rogers) will wrestle with her inner demons. She’s already been tempted to drink, but the desire will become overwhelming in the week ahead. Maggie will eventually cave in, which will bring big trouble to Days. Once Maggie gets started, she just won’t be able to stop.

However, Maggie’s inebriated state could lead to more problems than she realizes. On May 24, a shocking secret will be revealed. That’ll probably be the Friday cliffhanger, and it should relate to Nicole Walker’s (Arianne Zucker) plan with Xander Cook (Paul Telfer). We can assume this since the following Monday will bring clarity on Nicole and Xander’s secret scheme. It’ll suddenly all make sense to viewers.

Backing up to that Friday though, Maggie will drink until she passes out. Will she overhear something she shouldn’t while she’s in that state? Maggie may drift in and out of her drunken stupor, which could leave her confused by anything she learns.

Days of Our Lives spoilers say Brady Black (Eric Martsolf) will discover a plastered Maggie and offer to get her some help. Maggie won’t think rehab is necessary and she won’t think she needs a babysitter either. She’ll convince Brady to keep his mouth shut, but a troubling admission will come out of all this.

Once Maggie’s sober and trying to get back on track, DOOL fans can expect her to come clean. Maggie will divulge a stunning story, so Brady’s sure to be intrigued. Now let’s consider what Maggie might recap. Will she share what she remembers from when she passed out?

It’s possible Maggie will inadvertently eavesdrop on Nicole and Xander’s conversation. Again, they’ll be spelling everything out the same day Maggie’s a mess. Xander and Nicole may not know Maggie’s nearby. Even if they do, they probably won’t think she’d recall anything in that condition. Xander and Nicole might assume Maggie’s out cold instead of just drifting.

What if Xander refers to Nicole as Kristen DiMera (Stady Haiduk)? Could there be talk of the mask Kristen is seemingly wearing? Will they discuss Holly Jonas (Harlow and Scarlett Mallory) being alive and somewhere else? Even Xander and Nicole’s conversation in general would be a red flag. Maggie may spill how strange the whole encounter was and brush it off as drunkenly imagining things.