Days of Our Lives Spoilers: Week of May 20 Preview – Eve’s Reign of Terror As Police Commissioner – Beats On Ben In Town Square

BY hellodrdavis on May 17, 2019 | Comments: 2 comments
Related : Days of Our Lives, Soap Opera, Spoiler, Television 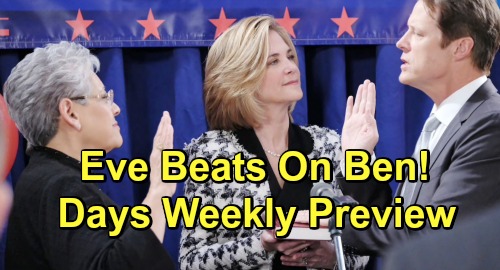 Days of Our Lives (DOOL) spoilers tease that Eve Deveraux (Kassie DePaiva) will have a new job and a new mission. The DOOL promo for the week of May 20, is all about Eve and her new reign over Salem. Eve is Salem’s new first lady, since Jack Deveraux (Matthew Ashford) won the mayoral election, but she’ll soon be fulfilling a much bigger role in Salem.

According to Days of Our Lives spoilers, Jack is going to appoint Eve to be the town’s new police commissioner. After what he felt was a disastrous run by former commissioner Hope Hernandez (Kristian Alfonso), he fired her and that created a void within the Salem PD. And after Rafe Hernandez (Galen Gering) turns down the position, Eve will be in!

Of course, Eve’s never gotten over the fact that Ben murdered her daughter Paige Larson (True O’Brien) back when he was a serial killer. Eve hasn’t forgotten it, and DOOL viewers will remember that Eve attacked and nearly beat Ben to death when he came back to Salem last year.

Eve’s since moved on to deal with other things, like bringing Jack back to Salem and making him mayor, but the DOOL promo clearly indicates that Eve hasn’t forgotten about her beef with Ben. She’s even shown slapping Ben in town square, indicating her deep-seated fury with him.

But Ben’s not going to be Eve’s only target. The promo shows her ominously staring down Xander Cook (Paul Telfer), which is interesting since she and Xander had a brief partnership not too long ago. Xander helped Eve bring Jack back to Salem, then stole Dr. Wilhelm Rolf’s (William Utay) diary from her. It will be interesting to watch these two face off once Eve takes the reigns as commish.

DOOL viewers are sure to see Eve shake things up in Salem and do things her way going forward. Are you looking forward to watching Eve stir things up in the Salem PD? Stay tuned to DOOL and don’t forget to check CDL often for the latest Days of Our Lives spoilers, updates, and news.