BY Heather Hughes on May 17, 2019 | Comments: one comment
Related : Days of Our Lives, Soap Opera, Spoiler, Television 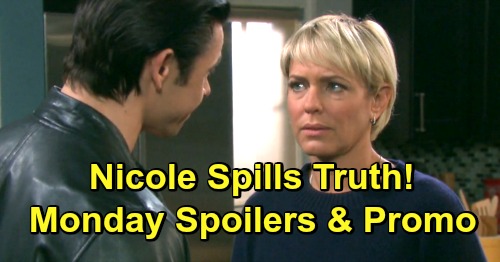 Days of Our Lives (DOOL) spoilers for Monday, May 20, tease that we’ll learn more about Nicole Walker’s (Arianne Zucker) secret partnership with Xander Cook (Paul Telfer). When we last saw them, they were popping the Champagne to celebrate their successful scheme. Xander pointed out that Nicole couldn’t have pulled off the plan without him, so Nicole will agree on Monday.

DOOL fans can expect some details about Nicole’s role in all this. She’ll talk about putting on quite a performance for the people of Salem. Nicole’s grief over losing Holly Jonas (Harlow and Scarlett Mallory) has indeed been convincing, but it’s all a sham.

Xander and Nicole are duping Holly’s loved ones, but why? It’s probably because Nicole is actually someone else, and Kristen DiMera (Stacy Haiduk) in a mask seems to fit. That’s especially true since Nicole got caught gazing at the portrait of Kristen’s father, Stefano DiMera (Joseph Mascolo). Holly’s faked death is a DiMera plot if we’ve ever seen one!

Other Days spoilers say a setback’s looming for Will Horton (Chandler Massey). He’ll face a crisis of some sort, so this could involve another shocking seizure. Will has also been battling some memory issues and mood swings. Those could be considered setbacks as well, so Sonny Kiriakis (Freddie Smith) will deal with whatever this tumor throws at them.

Meanwhile, Days of Our Lives spoilers state that John Black (Drake Hogestyn) will worry about Will. He’ll definitely worry about Dr. Marlena Evans (Deidre Hall), too. Marlena loves her grandson dearly, so John would do anything to fix this for her. That’s why he’ll offer to track down Dr. Wilhelm Rolf’s (William Utay) diary if he can.

John may not be certain he can find it, but it’s at least worth a shot. Marlena may back John up on that and hope that his investigative skills come in handy. If anyone can locate Dr. Rolf’s research, it’s John. DOOL viewers know Xander has the diary, so it’s closer than John thinks. With any luck, it’ll land in John’s hands soon enough.

Days of Our Lives spoilers say that diary will eventually be given to Dr. Sarah Horton (Linsey Godfrey) and Dr. Rex Brady (Kyle Lowder). They’ll try to treat Will’s tumor before his time runs out, but understanding Dr. Rolf’s notes won’t be easy!