BY Heather Hughes on May 17, 2019 | Comments: 3 comments
Related : Days of Our Lives, Soap Opera, Spoiler, Television 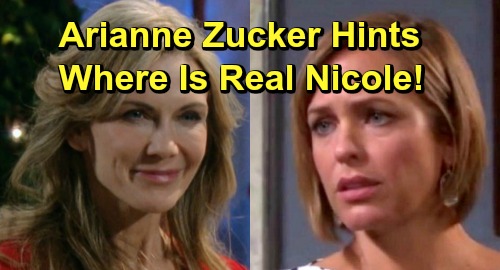 Days of Our Lives (DOOL) spoilers tease that something’s up with Nicole Walker (Arianne Zucker) and it can’t be good! She’s in cahoots with Xander Cook (Paul Telfer), which points to an impersonation plot. The Nicole we’ve been looking at doesn’t seem to be the real Nicole at all.

There’s a chance brainwashing could be to blame, but it makes more sense for Kristen DiMera (Stacy Haiduk) to be right there in Salem. She wouldn’t want Nicole growing closer to Brady Black (Eric Martsolf) as herself, so Kristen is likely in a mask and doing it for her. Of course, that brings us to an interesting question. If this is Kristen, where’s the real Nicole?

Days of Our Lives spoilers state that Arianne Zucker is back for a long-term stint, so Nicole has to be somewhere. She definitely didn’t get blown to smithereens in that warehouse explosion, so there’s no need to worry about that. DOOL will reveal all eventually and give us the Nicole we’ve been waiting for.

Now’s a great time to revisit Zucker’s Days return interview, which was featured in Soap Opera Digest just before her comeback. She made some cryptic comments that might be a little more enlightening in the present. “This character’s been through so much,” Zucker said. “Now, obviously, she’s not dead, so having to heal from that, she’s in a different place.”

Looking at that statement now, it seems Zucker meant literally! Nicole may indeed be in a very different place – on the other side of the country or even the world knowing Kristen. Zucker’s interview contained a few other potential clues. “Not that the character wasn’t vulnerable before, but now there’s these vulnerable aspects to her that are different,” Zucker said.

To examine this from another angle, we can’t help but notice Zucker repeatedly refers to her character instead of calling Nicole by name. That could be one more hint that Nicole isn’t who she says she is. It may not feel like it sometimes, but Kristen really is quite vulnerable. Brady is her weakness as we see from the plot she likely has in motion. Kristen is willing to put everything on the line for him.

By saying things like “this character” and “the character,” Zucker might’ve been sneakily talking about multiple characters she’s portraying. Regardless, the signs are there onscreen. Days of Our Lives spoilers say there’s much more to come in “Nicole’s” storyline, so viewers will want to stay tuned.

Are you excited to see what’s next for Nicole – both the real one and the fake one? We’ll give you updates as other Days news comes in. Stick with DOOL and don’t forget to check CDL often for the latest Days of Our Lives spoilers, updates and news.