BY Heather Hughes on May 14, 2019 | Comments: 3 comments
Related : Days of Our Lives, Soap Opera, Spoiler, Television 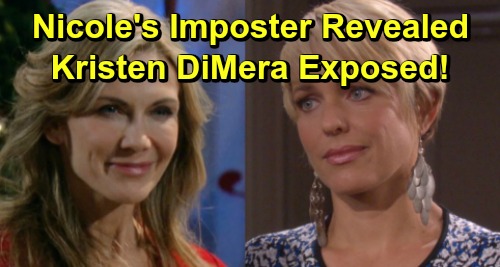 Days of Our Lives (DOOL) spoilers tease that Nicole Walker (Arianne Zucker) will do something surprising. She’ll offer gratitude to an ally no one in Salem would’ve expected. It turns out Nicole is working with Xander Cook (Paul Telfer), but things aren’t quite as they seem. The pair will celebrate the plot they pulled off, but that obviously doesn’t sound like Nicole at all.

Of course, there’s an easy explanation for Nicole’s strange behavior. We’re clearly dealing with a very different version of Nicole. It’s possible Nicole has been brainwashed, but we doubt it based on the clues – like Nicole wanting to conceal her body from Eric Brady (Greg Vaughan). A mask-wearing imposter scenario seems far more likely.

After all, we’ve still got a missing Kristen DiMera (Stacy Haiduk) out there. Where is she? Days of Our Lives released plenty of May sweeps info and every single thing has been explained except one: the mystery surrounding Kristen. What’s the unknown in Xander’s storyline? The identity of his secret partner. It’s easy to fit these puzzle pieces together.

Kristen has to be the secret partner, so it’s logical to assume she’s pretending to be Nicole. Why? Because Days spoilers say Nicole and Xander are allies. They’ll practically be partying over their scheme. The real Nicole would never hurt Eric, Maggie Kiriakis (Suzanne Rogers) or even Chloe Lane (Nadia Bjorlin) by faking her own daughter’s death.

Nicole wouldn’t let Xander scare Holly Jonas (Harlow and Scarlett Mallory) by sneaking in her room and kidnapping her either. That had to be a pretty traumatic ordeal for the kid. Nicole’s an excellent mom, so her being in on it makes no sense at all.

The timing also fits with Kristen posing as Nicole. Days of Our Lives spoilers say “Nicole” will thank Xander for his help on Friday, May 17. That’ll be the cliffhanger that leads to Monday’s explanation. On May 20, Xander’s secret partner will be revealed to DOOL viewers. They may let fans think it’s real-deal Nicole at first, but the whole truth should be exposed in time.

If all signs point to Kristen being the secret partner and then Nicole is revealed as the secret partner, we have every reason to believe Kristen IS “Nicole.” Days spoilers say this storyline will bring some crazy curveballs for Salem, so don’t miss the hot drama ahead! We’ll give you updates as other news comes in. Stick with DOOL and don’t forget to check CDL often for the latest Days of Our Lives spoilers, updates and news.