BY Heather Hughes on May 14, 2019 | Comments: one comment
Related : Days of Our Lives, Soap Opera, Spoiler, Television 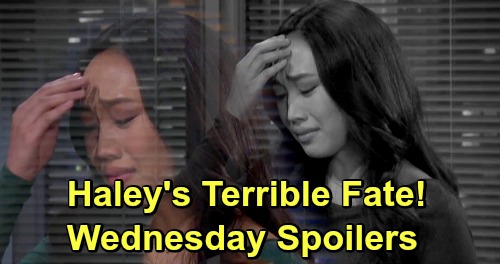 Days of Our Lives (DOOL) spoilers for Wednesday, May 15, tease that Hope Hernandez (Kristian Alfonso) will hand over divorce papers. Rafe Hernandez (Galen Gering) will be surprised by the timing, but he knew this was coming. That’s why he’ll sign the divorce papers on the spot and try to put this disastrous marriage behind him. Rafe’s weary of all the problems, so he’ll just be ready to move on.

Hope is also feeling worn down by the issues they’ve faced in their relationship. Rafe’s role in Holly Jonas’ (Harlow and Scarlett Mallory) “death” was the last straw. This Days marriage couldn’t withstand anymore, so Rafe hurled his wedding ring off a cliff and Hope called Belle Black (Martha Madison) to get the ball rolling on a divorce. Rafe and Hope have clearly accepted defeat, so it’s time to let go.

Of course, there’s a chance things could change for “Rope” down the road, but Rafe will keep drifting toward Lani Price (Sal Stowers) for now. Meanwhile, JJ Deveraux (Casey Moss) will share a bittersweet conversation with Haley Chen (Thia Megia). Days of Our Lives spoilers say they’ll be honest about their feelings and what might’ve been, but they’ll also be torn apart by Haley’s deportation.

As JJ accepts that this is goodbye, he’ll lash out at his traitor of a father. Jack Deveraux (Matthew Ashford) will approach JJ in hopes of making amends, but JJ will respond with pure rage. He’ll punch Jack in the face, so that should bring some satisfaction in the moment.

Fortunately, JJ will form a desperate plan later this week. Days of Our Lives spoilers state that JJ will take Haley on the run, so the drama’s about to heat up on the NBC soap. Over with Jennifer Horton (Melissa Reeves), she’ll fume over Haley’s terrible situation. Jenn will think this has Jack and Eve Donovan (Kassie DePaiva) written all over it, so she’ll blow her top in Wednesday’s DOOL episode.

Days spoilers say Eve and Jack will get an earful, which may bring a hint of guilt for Jack. However, Eve will be there to make sure he stays committed to their plot for Salem domination! We’ll give you updates as other news comes in. Stick with DOOL and don’t forget to check CDL often for the latest Days of Our Lives spoilers, updates and news.