BY Heather Hughes on May 9, 2019 | Comments: 3 comments
Related : Days of Our Lives, Soap Opera, Spoiler, Television 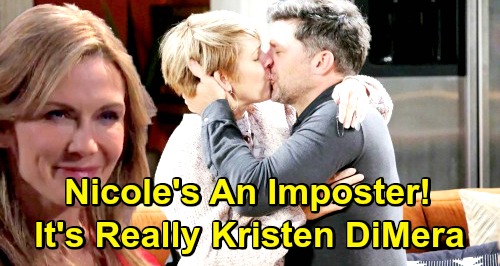 Days of Our Lives (DOOL) spoilers tease that Nicole Walker (Arianne Zucker) will continue to push Eric Brady (Greg Vaughan) away. She’ll also pull Brady Black (Eric Martsolf) closer, but it’ll be Xander Cook (Paul Telfer) she ends up kissing soon. Nicole will seemingly display some erratic behavior, which is to be expected when someone’s dealing with terrible grief. However, there may be more to the story.

Days fans know Xander has another partner in crime. He’s refusing to tell Ted Laurent (Gilles Marini) who it is, but it’s reasonable to assume it’s Kristen DiMera (Stacy Haiduk). Her storyline is the only thing that’s still a mystery when it comes to May sweeps spoilers. Everyone else has been accounted for and all other stories have become clear. Only Kristen remains, so she has to fit here.

It turns out there could be an even bigger twist to this hot plot. The best way to hide something is to put it in plain sight. What if Kristen isn’t just working behind the scenes? Has she been right in front of us the whole time? We mentioned that Nicole will start to do some strange things, but is that really Nicole?! There’s a chance that Kristen is posing as Nicole with a very realistic mask.

DOOL’s head writer, Ron Carlivati, did a buzzed-about mask story during his time at General Hospital. Days of Our Lives has done some of these before as well. Another one may be underway, so let’s consider a few clues.

For starters, Nicole turned down sex with Eric because her body had changed from the fire and her recovery. Was that the real reason? What if it’s Kristen’s body under there and Eric would know the difference?

Of course, there’s a bit of a problem since Kristen undoubtedly wants to get back together with Brady. Winning him over would probably be the point of all this, but he’d know the difference as well. Perhaps Kristen has that covered somehow. She might think she can win Brady over as herself eventually or maybe she just plans to cross that bridge when she comes to it.

Nicole’s grief certainly seemed sincere by the side of the road, but this is Kristen we’re talking about. She could sell it. After all, it’d be awfully suspicious if she was posing as Nicole and just said, “Oh, my only daughter died. That’s too bad.” Kristen would have to make it look legit, and we have no doubt that she could pull it off.

If this is indeed Kristen, she needed the Holly grief so she could shove Eric out of the picture and get the man she’s obsessed with – Brady. Kristen was working with Xander before the warehouse explosion, so it makes sense that they’re teaming up once again. They’re two peas in a pod when it comes to causing chaos and pain.

During the week of May 20-24, Days of Our Lives spoilers say Nicole and Xander will have something to celebrate. They’ll be pleased once they’ve pulled off their scheme. That doesn’t add up for the real Nicole, so it may actually be “Nicole” aka Kristen!

Do you think Kristen is pretending to be Nicole? If so, what has she done with the real one? We’ll give you updates as other Days news comes in. Stay tuned to DOOL and don’t forget to check CDL often for the latest Days of Our Lives spoilers, updates and news.