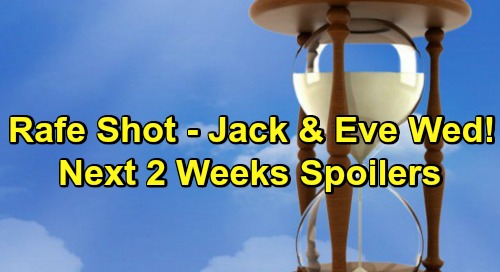 Days of Our Lives (DOOL) spoilers for the next 2 weeks tease that we’ll see several major confrontations and confessions. During the week of April 8-12, Rafe Hernandez (Galen Gering) will tell Hope Hernandez (Kristian Alfonso) that he’s going to keep Jordan Ridgeway’s (Chrishell Hartley) baby for her. He’ll be David’s legal guardian, but Hope isn’t going to like that plan.

Hope will contend that Rafe’s making a unilateral decision, which isn’t what she had in mind. They’re married and live under the same roof, so this baby would affect her life in a big way. Hope will point out that they’re already in a relationship crisis, so throwing a baby in could add to their stress levels and make matters worse. However, Rafe won’t budge and that means he’ll just have to move out.

Over with Claire Brady (Olivia Rose Keegan), she’ll put on a fake smile and act like she’s on board with helping Haley Chen (Thia Megia). DOOL spoilers say Claire will finish up any final wedding preparations for Haley, but she’ll hope this wedding never happens at all. After Claire records another sham marriage tape, she’ll be armed and ready when she makes a surprise appearance at the nuptials.

Tripp Dalton (Lucas Adams) will get a shock and so will Eve Donovan (Kassie DePaiva) – but for a different reason. Days of Our Lives spoilers say Claire will come clean about setting the cabin fire last year. Once Eve hears the whole story, she’ll assure Claire that they can pin this on Ben Weston (Robert Scott Wilson).

Meanwhile, Eric Brady (Greg Vaughan) will pitch in with Jennifer Horton’s (Melissa Reeves) plot. She’ll try to recreate a scene that’s a nod to Days history. Jack Deveraux (Matthew Ashford) once saved Jennifer from marrying the wrong guy by posing as a firefighter and faking a fire. Jennifer will do the same as she works to stop Jack’s marriage to Eve. She’ll also hope this will bring back some memories.

Days of Our Lives spoilers say Jack will indeed see a flash from his past, but it won’t change his mind about marrying Eve. During the week of April 15-19, Eve and Jack will tie the knot. They’ll hope to make Jack the mayor soon and become Salem’s next power couple.

Over with Ciara Brady (Victoria Konefal), she’ll get an invitation to stay at Ben’s house for the night. Ciara will naturally take Ben up on it, so they’ll ultimately make love. Later, Ciara will get caught in a hostage situation with Gabi Hernandez (Camila Banus). They’ll be terrified as Chloe’s cartel enemies come after them, but Hope, Ben and Rafe will leap into action.

Stefan DiMera (Brandon Barash) will undoubtedly keep a close eye on this and do what he can as well. After the danger spirals out of control, Rafe will get shot! Days of Our Lives spoilers say he’ll have to be rushed to the hospital, so stay tuned for all the medical drama.

Elsewhere, will realize Brady Black (Eric Martsolf) lied to her. He insisted he would respect her wishes and back off, but he’s still scheming against Stefan with Gabi. Chloe may discover that eventually and rip into Brady for trying to deceive her. He’s been dealing with some familiar feelings for Chloe, but this should blow up whatever chance he had – at least for now.

It sounds like the next two weeks will bring some great moments. We’ll give you updates as other Days news comes in. Stick with DOOL and don’t forget to check CDL often for the latest Days of Our Lives spoilers, updates and news.