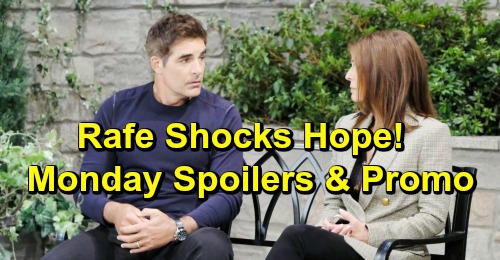 Days of Our Lives (DOOL) spoilers for Monday, April 8, tease that Rafe Hernandez (Galen Gering) will pay Jordan Ridgeway (Chrishell Hartley) another visit at Bayview. He’ll let her know that he tracked down her baby, so that’ll be a huge relief. Jordan will be disappointed since can’t take care of her son right now, but she’ll still hope to keep him out of the system. She just wants David in a loving home.

Rafe will wonder about David’s father, who’s missing from the birth certificate. Days of Our Lives spoilers state that Jordan will shut down the idea of finding him. She’ll insist it’s best if he’s not in the picture, so Rafe will assume the guy must be pretty terrible. He’ll take Jordan’s word for it and agree to take care of David himself.

Rafe will promise that her son will be in good hands, so Days spoilers say a grateful Jordan will embrace him. She’ll just have to hang in there at Bayview and focus on getting better. Meanwhile, Ted Laurent (Gilles Marini) will push Hope to dump Rafe and be with him instead. He’ll insist that he loves Hope and would treat her far better than Rafe does, so Hope will consider his offer on some level.

Days of Our Lives spoilers say Hope won’t admit she’s tempted, but Ted will think she indeed has feelings for him. He’ll contend that he’s willing to wait as long as it takes. Over with Jennifer Horton (Melissa Reeves), she’ll freak over Eve Donovan’s (Kassie DePaiva) latest announcement. When some technical difficulties threw off the plan to expose the sham marriage, Eve opted to reveal a real one.

Jennifer was stunned to learn Eve and Jack Deveraux (Matthew Ashford) are getting married. She’ll confront them in Monday’s DOOL episode and demand an explanation. Jenn will feel like this is coming out of nowhere – and she’s certainly right about that! You can bet Eve will be proud of her split-second decision. Since the announcement was so public, Jack can’t back out without hindering his campaign.

Furious Jennifer, on the other hand, won’t sit back and accept this. She’ll try to take charge of the situation with a sneaky plan in the week ahead. We’ll give you updates as other Days news comes in. Stay tuned to DOOL and don’t forget to check CDL often for the latest Days of Our Lives spoilers, updates and news.