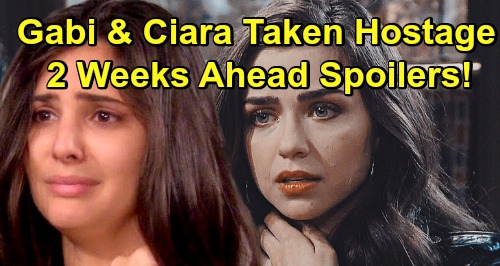 Days of Our Lives (DOOL) spoilers tease that Chloe Lane’s (Nadia Bjorlin) problem just isn’t going away. El Fideo’s (Andoni Gracia) associates are determined to seek retribution, but it’s been a bit difficult since she’s locked up tight in Stefan DiMera’s (Brandon Barash) fortress. Ben Weston (Robert Scott) has been serving as a guard, so Chloe and the kids are definitely in good hands.

However, there was a close call recently when an assassin shot through a window at the DiMera mansion. Stefan beefed up his security efforts, but it’s clear that there’s still imminent danger. Days spoilers say Ciara Brady (Victoria Konefal) will once again become a target. She was in the wrong place at the wrong time before and that’ll be the case during the week of April 15-19, too.

Unfortunately, Gabi Hernandez (Camila Banus) will also find herself caught up in something she didn’t anticipate. Days of Our Lives spoilers state that Ciara and Gabi will face a hostage crisis. A cartel member will burst in, pull a gun on them and make sure they stay put. It’s a great idea for DOOL to put these particular ladies in peril. Including Gabi and Ciara in this story will pull several people into this.

Hope Hernandez (Kristian Alfonso) and Ben will join forces as they try to save Ciara. Honestly, this girl needs to stop landing in deadly situations! Nevertheless, Ben will step up to rescue Ciara as usual. As for Gabi, Rafe Hernandez (Galen Gering) will fight for his sister’s freedom and run into some danger of his own because of it.

Stefan may also worry about Gabi on some level. He hates Gabi, but he’s also battling his attraction to her. Plus, Stefan has a soft spot for children and wouldn’t want Arianna Horton (Harper and Sydnee Udell) to lose her mother. Days of Our Lives spoilers say this ordeal could work out well for Gabi, who’s planning to seduce Stefan as part of her plot with Brady Black (Eric Martsolf).

Perhaps Stefan will feel a little something when Gabi’s life is nearly lost. DOOL fans won’t want to miss the exciting episodes ahead! We’ll give you updates as other Days news comes in. Stick with the NBC soap and don’t forget to check CDL often for the latest Days of Our Lives spoilers, updates and news.