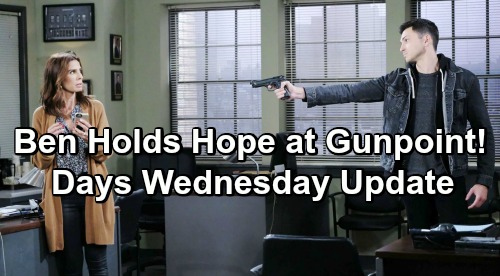 Days of Our Lives (DOOL) spoilers for Wednesday, February 13, tease that Ben Weston (Robert Scott Wilson) will ponder a mystery while in police custody. Hope Hernandez (Kristian Alfonso) and Eli Grant (Lamon Archey) just found shocking evidence in Ben’s room, so he’s struggling to make sense of all this. As Ben sits in the Salem PD’s interrogation room, he’ll mull over the facts of the case.

Fortunately, Ben will eventually move past that option and get to the truth. Days of Our Lives spoilers say Ben will realize Jordan Ridgeway (Chrishell Hartley) must be responsible. She recently spoke with Ben at his hotel, but the real purpose of that visit was to frame Ben for two kidnappings.

Once Ben’s cracked the case, he’ll be determined to escape from the cops and rescue Ciara. Days spoilers state that Ben will wrestle Eli’s gun away from him on Wednesday. He’ll aim it at Hope and insist that she’s going to help him. Ben will assure Hope that he’s doing this for Ciara’s sake, but Hope will manage to give Ben the slip.

That’ll leave Ben to find another helper later this week, so stay tuned to watch Ben and Chad DiMera (Billy Flynn) join forces. In the meantime, Rafe Hernandez (Galen Gering) will return home and stumble across a stunning sight. He’ll find Kate Roberts (Lauren Koslow) near death after Jordan’s drugging, so he’ll rush her to the hospital and try to save her life.

While Rafe steps up as a hero, John Black (Drake Hogestyn) will worry about the past. He believes Leo Stark (Greg Rikaart) may be his son, so he’ll question Diana Cooper (Judith Chapman) about it in Wednesday’s DOOL episode. John will raise the possibility and demand the truth from Diana, but it looks like she’ll offer a phony story instead.

Diana wants to pull John closer, so this is the perfect excuse. By falsely claiming John is Leo’s father, Diana can keep John in her orbit and try to destroy his marriage to Dr. Marlena Evans (Deidre Hall). Days of Our Lives spoilers say Diana will prove to be quite the schemer just her boy, Matthew!

Some fantastic scenes are coming up on the NBC soap. We’ll give you updates as other Days news emerges. Stick with DOOL and don’t forget too check CDL often for the latest Days of Our Lives spoilers, updates and news.