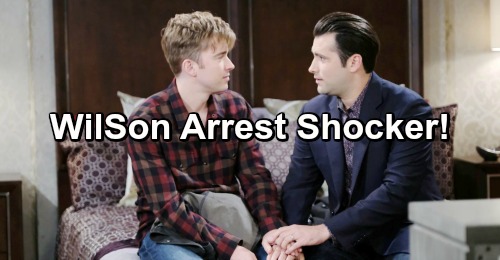 Days of Our Lives (DOOL) spoilers tease that Leo Starke (Greg Rikaart) will get duped and distracted. Thanks to Gabi Hernandez’s (Camila Banus) help, Sonny Kiriakis (Freddie Smith) and Will Horton (Chandler Massey) will spend a wonderful Valentine’s Day together. It’ll be a nice break from the Leo nightmare they’ve been stuck in, but the peace won’t last.

During the week of February 18-22, Leo will fight back in a big way. It sounds like he’ll find out about Will and Sonny’s little scheme. Leo may realize Gabi deceived him so they could hook up and have a small dose of happiness.

Of course, that’s absolutely not allowed! Leo likes to be the one in control, especially now that his meddling mom’s in town to boss him around.

Diana Cooper (Judith Chapman) has serious dirt on Leo, but at least she’s got her own agenda to keep her busy. Meanwhile, Leo will hope to remain in control of his own plot. He’ll decide to teach Will and Sonny a lesson, so some harsh accusations are coming up.

Days of Our Lives spoilers say Leo will lie about Sonny and Will’s actions. It turns out his bogus story will land “WilSon” in trouble with the law. On the bright side, it’s better than taking them down with the real evidence.

Leo’s got pictures that prove Will and Sonny tried to cover up his attempted murder. That’s enough to put them behind bars for a long time, so Leo doesn’t want to play that card just yet. He’ll save it for when he really wants to cause damage. It seems this move will simply be retaliation and a scare tactic.

Nevertheless, Leo will cause plenty of drama. Days of Our Lives spoilers say Dr. Marlena Evans (Deidre Hall) won’t be happy about this. She’ll explode over Leo’s deception, but he won’t think there’s anything she can do about it. Leo will thoroughly enjoy being the one in charge, but Marlena certainly won’t give up.

As for Will and Sonny, they’ll find themselves taken to the police station for questioning. Eli Grant (Lamon Archey) will force them to endure a tough grilling session. DOOL fans know how the cops can be in Salem!

They tend to believe their suspects are guilty until proven innocent, which obviously isn’t the right mentality. It seems that on Days of our Lives ‘Due Process’ becomes ‘DOOL process.’ It won’t help that Eli will push for the whole truth, which “WilSon” can’t offer.