Days of Our Lives Spoilers: Jordan Leaves Ciara to Die in Another Cabin Fire – Ben Battles Blaze to Save Love 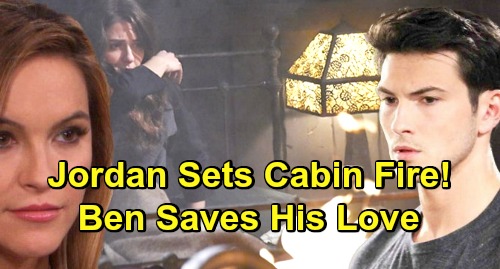 Days of Our Lives (DOOL) spoilers tease that Ben Weston (Robert Scott Wilson) will face off with his sister. Jordan Ridgeway (Chrishell Hartley) has always had Ben’s back in the past, so he won’t understand why she’s so against him now. The siblings will get into a heated argument about Ben’s mental stability.

Nevertheless, Jordan will be adamant that Ben is dangerous and must commit himself to Bayview. She’ll think if Ben really cares about Ciara Brady (Victoria Konefal), this is the best thing he could do for her. Days spoilers say Ben will shut down the idea, so Jordan will resort to drastic measures. After framing Ben for Ciara’s kidnapping as well Charlotte DiMera’s abduction, Jordan will return to the cabin.

Once Ben is arrested and in jail, Jordan will feel confident that Charlotte will be safe. She’ll scoop the baby up and plan on returning her to Abigail Deveraux (Kate Mansi). Unfortunately, Jordan won’t have high hopes for Ciara’s future. She may fear that as long as Ciara believes in Ben, there’s always going to be a chance for him to go free.

Jordan might decide to sacrifice Ciara for the sake of all the other potential victims. She clearly thinks Ben is a real menace to society. Regardless, Jordan will ultimately set the cabin on fire. That’s right. Another shocking blaze is on the way. Please tell us they won’t salvage the place this time!

Meanwhile, Ben will escape from custody and push Chad DiMera (Billy Flynn) to help him out. With a little teamwork, they’ll manage to track Ciara down. Days of Our Lives spoilers say Ben will be horrified when he sees the flames at the cabin. He’ll rush in the building, untie Ciara and carry her to safety.

Thankfully, Ben will rescue Ciara just in time. She’ll probably have some smoke inhalation, but she’s going to be just fine. DOOL fans can expect some warm moments between Ciara and Ben. Days of Our Lives spoilers say she’ll obviously forgive him for his mistakes. It’s the least Ciara can do since Ben will have saved her life not once, but twice.

However, some hospital shockers are coming up thanks to Jordan. Days viewers won’t want to miss the exciting conclusion of this storyline! We’ll give you updates as other news comes in. Stay tuned to DOOL and don’t forget to check CDL often for the latest Days of Our Lives spoilers, updates and news.