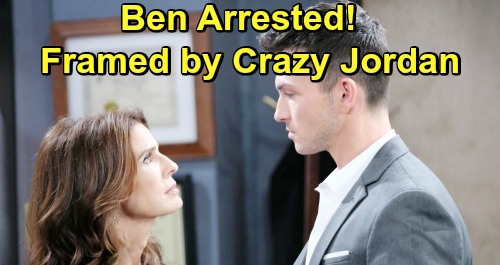 Days of Our Lives (DOOL) spoilers tease that Ben Weston (Robert Scott Wilson) has even more drama headed his way. He keeps trying to prove he’s a changed man, but it seems like the whole world’s against him. Ben just wants to live a peaceful life and win back Ciara Brady’s (Victoria Konefal) trust, but he can’t do either of those things at the moment.

Jordan Ridgeway (Chrishell Hartley) is partially to blame for that. Hope Hernandez (Kristian Alfonso) has certainly been a problem for Ben as well, but Jordan stirred up trouble again by kidnapping Ciara. Days spoilers say Charlotte DiMera’s abduction will also lead to major issues. Ben is eager to track Ciara down, but another shocker will soon stand in his way.

Jordan feels like Ben is going to target old enemies and hurt anyone he claims to care about. She’s nuts, but at least her heart’s in the right place. Since Ben apparently isn’t screwing up fast enough for Jordan, she’ll try to rush this along. Days of Our Lives spoilers say Jordan will plant evidence to make Ben look guilty. She’ll put Charlotte’s blanket and Ciara’s phone in Ben’s hotel room.

Naturally, Hope will feel like she was right about Ben all along. She’ll undoubtedly blast Ben and demand answers about Ciara’s location, but he won’t have a clue. Ben will insist that he’s been set up, which is kind of his thing now! He wasn’t to blame for the arson and he’s not behind any of this either. Ben won’t know his crazy sister is responsible just yet, but he’ll figure it out sooner or later.

In the meantime, Days of Our Lives spoilers say Ben will be arrested over the bogus proof. He’ll be incredibly frustrated once he’s sitting in lockup. The possibility of lengthy prison sentence will be the least of Ben’s worries. He’ll only be focused on Ciara and getting her back home where she belongs.

DOOL fans can expect Ben to take drastic action to save Ciara. He’ll risk everything by breaking out of jail to help her. After Ben’s escape, he’ll convince Chad DiMera (Billy Flynn) to team up for a stunning rescue mission. The situation will quickly spiral out of control, but it’s sure to deliver plenty of excitement.