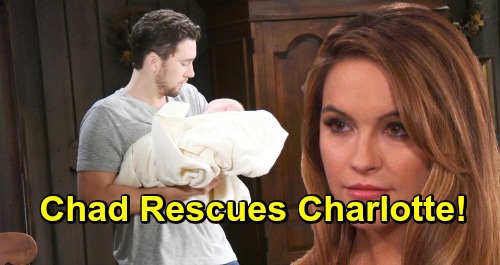 Days of Our Lives (DOOL) spoilers tease that Chad DiMera (Billy Flynn) will be on a mission to save his family. Of course, you might be thinking that Chad’s already been on that mission! That’s true, but the stakes will be raised when Charlotte DiMera suddenly disappears.

Chad only recently found out Charlotte was his daughter, so he hasn’t even had a chance to bond with her as much as he wants to. Days spoilers state that he’ll hope to find his precious baby girl ASAP! Naturally, Abigail Deveraux (Kate Mansi) will be a mess over this nightmare. She’ll worry that she’s never going to see Charlotte again, but Chad will refuse to accept that.

Days of Our Lives spoilers say Chad will get the shocking news next week and immediately leap into action. He’ll start by confronting Stefan DiMera (Tyler Christopher), who will obviously be a reasonable suspect to both Chad and Abby.

After all, Stefan believed Charlotte was his own daughter thanks to Gabi Hernandez’s (Camila Banus) manipulation. He grew quite attached to her, so it’s easy to see why Chad will corner him first. However, Stefan won’t be the guilty party here. He’ll assure Chad that he’s barking up the wrong tree, so the determined DiMera will have to press on.

Days of Our Lives spoilers say Chad will turn to Ben next. He’ll rip into his enemy and accuse Ben of snatching Charlotte, but that won’t be right either. On the bright side, Chad’s getting warmer! It looks like Jordan Ridgeway (Chrishell Hartley) is most likely behind the abduction. Brother Ben will have no idea what Jordan’s been up to, but he’ll assure Chad that he’s innocent.

Chad will hit plenty of dead ends, but he’ll realize he has to keep searching for the truth. His daughter’s fate isn’t the only thing on the line. Chad will feel like his reunion with Abigail hinges on this, too. He once allowed Abigail’s baby to be taken from her and placed in Stefan’s devious hands. Can Chad undo the damage?

Ron Carlivati, DOOL’s head writer, offered some hints about what’s ahead in a recent issue of Soap Opera Digest. “We felt that if he was the one to take that child out of her arms, if he could be the one to put that child back in her arms…could he finally really earn her forgiveness?” We say the answer is yes!

This lets us know Chad will save the day, earn Abigail’s trust back and make things right. Chad could be part of how Jordan’s criminal behavior, which should include holding Ciara Brady (Victoria Konefal) hostage, is exposed. Are you excited to watch Chad rescue Charlotte and repair his family?