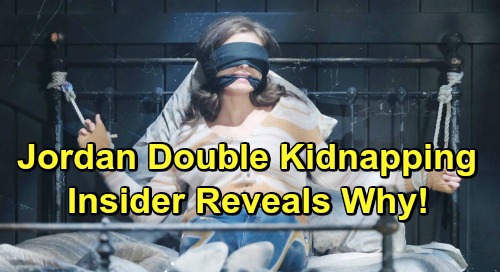 Days of Our Lives (DOOL) spoilers reveal that Jordan Ridgeway (Chrishell Hartley) will pop up again starting February 4. Since it’s been a while since Jordan was on screen, we’ll refresh your memory on what she was like. Jordan was mostly a calm physical therapist who lived with her cat, Arthur. She kept secrets thanks to her traumatic past, but she was sweet overall.

Of course, Jordan is also Ben Weston’s (Robert Scott Wilson) sister. That’ll be an important part of her comeback as well as a shift for her character. Days of Our Lives spoilers say Ciara Brady (Victoria Konefal) will be held captive at the cabin by someone she recognizes. DOOL fans can also expect Charlotte DiMera to be kidnapped next week.

We’d bet big money that Jordan is behind both of those shockers. Many Days viewers out there still don’t seem to believe it, so allow us to explain why it’s almost certainly true. For starters, Ciara will spot Jordan at the cabin on Monday. She’ll later plead with Jordan to help her escape.

On Wednesday’s new Days episode, January 30, Jordan will make her way back to Salem for an unrelated conversation with Abigail Deveraux (Kate Mansi). Then on Friday, Ciara will do her best to play a trick on her captor. All of that points to red flag number one.

If Jordan was really trying to be helpful, wouldn’t she just free Ciara? Instead, she’ll clearly leave Ciara trapped at the cabin, which is a huge tipoff that she put her there in the first place. Next, let’s talk about Charlotte’s kidnapping. On February 6, Days of Our Lives spoilers say Abigail will fill Jordan in on her earlier run-in with Ben. She’ll admit it’s terrifying knowing that Ben is a free man.

The next day, Abigail will be horrified to discover that Charlotte is missing. It’s pretty easy to see that Abigail’s fears will spark the abduction. Still not convinced? Don’t worry! There’s more proof.

In a recent issue of Soap Opera Digest, DOOL Head Writer Ron Carlivati talked about Jordan’s return to Days of Our Lives. He said that “…it seemed like a good moment to bring Jordan onto the canvas as someone who is like, ‘I love my brother, but I need to protect people from what he’s capable of.’”

Carlivati added that Jordan comes in like an “avenging angel” and hopes to save specific Salemites. It’s obvious she’s doing bad things with a good motive – at least in her own mind. It’s not really that unreasonable for Jordan to be a little off her rocker now. After all, Ben went off the rails. Jordan received far worse abuse than Ben did, so it makes sense.

Plus, Jordan inadvertently led to the accident that caused the death of her pregnant mother. Jordan was also raped and once held her stepfather, Clyde Weston (James Read), at gunpoint over it. It’s not crazy to think Jordan snapped over all the trauma.

Finally, a Days insider who first suggested Melinda Trask (Laura Kai Chen) would be Haley Chen’s (Thia Megia) sister and not her mother confirms the Jordan story. This person now insists Jordan will be as Ciara’s captor and Charlotte’s kidnapper. The evidence all lines up, so it’s probably safe to put your doubts to rest.