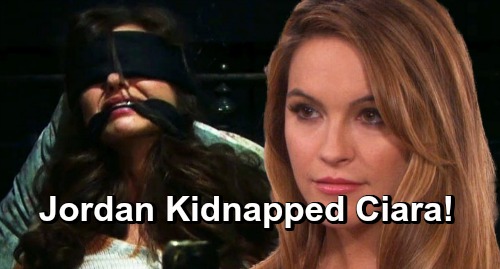 Days of Our Lives (DOOL) spoilers tease that Ciara Brady (Victoria Konefal) will soon find herself in a dangerous situation. She left Salem to visit Theo Carver (Kyler Pettis) in South Africa. She needed some space from Ben Weston (Robert Scott Wilson) after she caught him in some lies.

On this week’s new Days episodes, January 28 to February 1, viewers will see that Ciara was abducted at some point during her travels. Days spoilers show that Ciara is being held at an undisclosed location, tied to a bed and clearly someone’s prisoner.

Soon, Hope Hernandez (Kristian Alfonso) will be at her wit’s end trying to locate a missing Ciara. Ben will be frantic as well, but since it will be unclear where she went missing between Salem and South Africa, it will be hard for them to track her down.

But who’s got Ciara? Hope’s initial instincts will tell her that Ben had something to do with Ciara’s disappearance. But Hope should soon learn that Ben is just as torn up over Ciara’s disappearance as she is. Ben really cares for Ciara and he was devastated when she left town, so it’s pretty clear that he’s not the culprit here.

But there is someone else who will be back on canvas at just the time when viewers see that Ciara has been abducted, and that’s Jordan Ridgeway (Chrishell Hartley). Days of Our Lives spoilers cryptically say that Ciara will “encounter” Jordan as she’s held hostage. Could Jordan be Ciara’s abductor?

Stranger things have certainly happened on Days, but what would be Jordan’s motive for wanting to capture and hold Ciara? Another possibility is that there’s another abductor who’s got Jordan reluctantly helping him or her. Jordan could be in danger herself if she doesn’t help the abductor.

And there’s another clue from Days spoilers that indicate that Ciara’s abductor may be holding her nearby Salem. Just days after Ciara encounters Jordan from her point of captivity, Abigail Deveraux (Kate Mansi) and Jordan will have a conversation, presumably in Salem. This could point to anyone in or around Salem being the abductor.

It will be interesting to see how this all plays out, but it certainly looks like Jordan’s somehow involved in Ciara’s abduction. Do you think she’s the mastermind behind it all, or is someone else involved? Stay tuned to DOOL and don’t forget to check CDL often for the latest Days of Our Lives spoilers, updates, and news.