Days of Our Lives Spoilers: Kate Flatlines After Being Poisoned By Jordan

BY hellodrdavis on February 7, 2019 | Comments: one comment
Related : Days of Our Lives, Soap Opera, Spoiler, Television 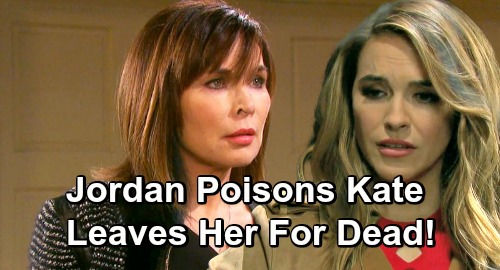 Days of Our Lives (DOOL) spoilers tease that Kate DiMera (Lauren Koslow) will soon find herself in deadly danger. Kate’s been in perilous situations before, but most of the time she manages to escape unscathed. This time, however, she’ll be at the mercy of someone who’s returned to Salem and has become totally unhinged…Jordan Ridgeway (Chrishell Hartley).

Jordan has apparently had a mental breakdown and has come to believe that her brother, Ben Weston (Robert Scott Wilson) still poses a threat to various people in Salem. Jordan has kidnapped both Ciara Brady (Victoria Konefal) and Charlotte DiMera and is holding them in a remote cabin to “protect” them from Ben.

Well, soon word will get out about Ciara’s disappearance and Charlotte’s kidnapping, and of course Kate will hear all about it. But when Kate runs into Jordan, she’ll start to wonder about Jordan’s mental state. Jordan will be acting very strangely, and Kate will needle her with questions.

Like nearly everyone else, Kate will think that Ben is behind Ciara’s and Charlotte’s disappearances, but as she spends more time around Jordan, she’ll start to wonder whether Jordan is helping Ben. Kate will come out and accuse Jordan of being in cahoots with Ben and will pressure her for details on Ciara and Charlotte’s whereabouts.

That will be about enough for Jordan. Kate will be getting just a bit too close to the truth for her liking, so Jordan will take drastic action. She’ll figure that Kate needs to be silenced, and she’ll poison Kate. It looks like Kate will pass out somewhere public but fairly remote, and she’ll eventually be found by Rafe Hernandez (Galen Gering).

Rafe will get Kate to the hospital soon enough, but Kate won’t be out of the woods yet. The poison will apparently do a number on Kate’s system and she’ll be in pretty bad shape. It will be touch and go, and ultimately Kate will flatline! Luckily, Kate will pull through, but she may have a long road of recovery ahead of her.

Of course, once Kate’s awake and talking, Rafe will be shocked to hear who did this to her. One thing’s for sure, Jordan’s going to be in some serious trouble and may ultimately stand trial for attempted murder as a result of her actions. Do you think Jordan will get punished, or will she just get sent to Bayview? Stay tuned to DOOL and don’t forget to check CDL often for the latest Days of Our Lives spoilers, updates, and news.