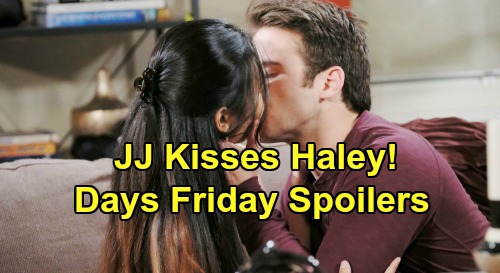 Days of Our Lives (DOOL) spoilers for Friday, February 8, tease that JJ Deveraux (Casey Moss) will assure Haley Chen (Thia Megia) that he’s in her corner. She’ll still be a mess over her secret and the possibility that it’ll come out. JJ knows Haley is an undocumented immigrant, but he’ll promise to support her. He’ll want Haley to understand that she doesn’t have to deal with this on her own.

Haley recently shared some nice moments with Tripp Dalton (Lucas Adams), but her bond with JJ is stronger. Tripp reunited with Claire Brady (Olivia Rose Keegan) anyway, so that gives JJ less competition – at least for right now. Days of Our Lives spoilers say JJ and Haley will confide in each other on Friday. They’ll grow closer and enjoy a steamy kiss, so this romance is definitely heating up.

Meanwhile, Chad DiMera (Billy Flynn) will start to get desperate. His daughter is missing, so he’ll be frantic as he revs up his search efforts. Charlotte DiMera is at the cabin with her kidnapper, Jordan Ridgeway (Chrishell Hartley), but Chad will remain in the dark for the time being. He’ll buy the idea that Ben Weston (Robert Scott Wilson) is behind the abduction, so expect a fierce faceoff in Thursday’s DOOL episode.

Days of Our Lives spoilers say Chad will hurl accusations at Ben. He’ll contend that Ben stole Charlotte just like he once stole Thomas DiMera (Asher Morrissette). Ben will insist that he isn’t to blame, but Chad won’t be convinced just yet. In fact, he’ll feel like his suspicions have been confirmed when bogus evidence surfaces next week.

Other Days spoilers say Ciara Brady (Victoria Konefal) will plot her escape. She’ll realize there’s no way to make Jordan see things rationally, so she’ll have to do some pretending. Ciara will want Jordan to think she’s had a change of heart. She’ll declare that Jordan is right about Ben and the serious threat he poses.

After Ciara praises Jordan for making her see the light, she’ll beg her captor to let her use the bathroom. Jordan will have some reservations about that, but she’ll ultimately untie Ciara and leave her alone. Unfortunately, Jordan will catch Ciara using her phone soon enough. She’ll end up drugging Ciara and tying her up once again, so Ciara’s situation just keeps getting worse!

Finally, Jack Deveraux (Matthew Ashford) will try to get in touch with Abigail Deveraux (Kate Mansi). He’ll want to offer support as she deals with Charlotte’s kidnapping crisis. It sounds like this could go a long way toward reestablishing their bond.

DOOL fans won’t want to miss the exciting scenes ahead. We’ll give you updates as other Days news comes in. Stay tuned to the NBC soap and don’t forget to check CDL often for the latest Days of Our Lives spoilers, updates and news.