Days of Our Lives Spoilers: Jordan’s Capable Of Cold-Blooded Killing – Did She Commit Ben’s Murders? 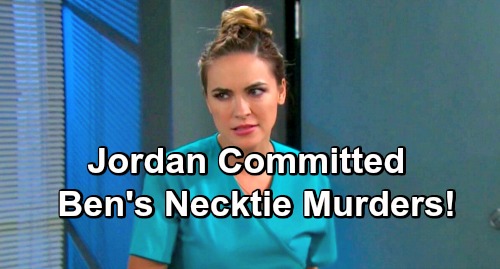 Days of Our Lives (DOOL) spoilers tease that there may be more to Jordan Ridgeway’s (Chrishell Hartley) story than first meets the eye. According to Jordan, she’s on a mission to “protect” the world from her brother Ben Weston (Robert Scott Wilson). She truly believes Ben is dangerous and an immediate threat to others.

But the manner in which Jordan is going about protecting others from Ben is downright devious. She abducted Ciara Brady (Victoria Konefal) and Charlotte DiMera and is holding them in an unsafe, rickety cabin in the woods. She’s got Ciara tied to a bed, and leaves Charlotte for hours on end while she goes running around Salem.

And now Jordan has gotten even more extreme in her behavior. She attacked Kate DiMera (Lauren Koslow) with a syringe, drugging her and leaving her to die in a hotel room. And now Jordan’s planning to kill Ciara by setting the cabin on fire, so that Ben will be suspected and eventually implicated for the crime.

Jordan’s actions certainly don’t seem like the actions of someone who is trying to “protect” others from Ben…and especially not when you consider the great lengths that Jordan is taking to frame Ben for her own crimes. Rather, Jordan’s actions are starting to look like she’s nothing more than a cold-blooded killer herself. She certainly didn’t mind leaving Kate for dead, and she doesn’t seem to feel any remorse for wanting to kill Ciara.

Given all of this, one has to wonder whether Jordan has been capable of murder all along. And if that’s the case, then we may need to question whether she had something to do with Ben’s “necktie” murders. Could Jordan have done the unthinkable and committed the murders that Ben was accused of committing back in 2015? Stranger things have certainly happened on Days of Our Lives.

It would certainly be an interesting turn of events if it comes out that Ben didn’t commit the necktie murders. It would likely get Hope Hernandez (Kristian Alfonso) off of Ben’s case and would pave the way for a free and clear “Cin” romance, without the specter of who Ben used to be hanging over them.

Do you think it’s possible that Ben didn’t commit any murders at all? Stay tuned to DOOL and don’t forget to check CDL often for the latest Days of Our Lives spoilers, updates, and news.