Days of Our Lives Spoilers: Ben Breaks Up With Ciara – Deadly Killer Back Again 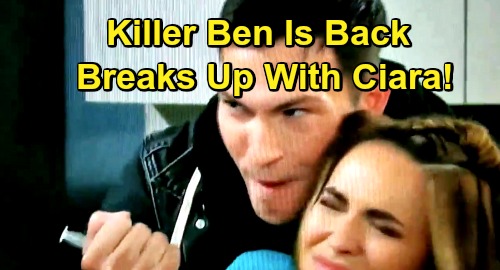 Days of Our Lives (DOOL) spoilers tease that Ben Weston (Robert Scott Wilson) will soon drop a huge bomb on Ciara Brady (Victoria Konefal). After Ben rescued Ciara from the burning cabin fire that his sister Jordan Ridgeway (Chrishell Hartley) set, it appeared that Ben and Ciara would be able to enjoy a nice reunion. Hope Hernandez (Kristian Alfonso) even apologized to Ben, which was a huge step forward.

But Jordan saw to it that that the danger and chaos would continue. After Jordan attacked Ben in Ciara’s hospital room, Ben attacked back as good as he got, and he came close to dosing Jordan with the same syringe that she was going to use on him. Ben was left shaken by the incident and told Ciara that he wanted to kill Jordan.

Of course, in the heat of the moment and with adrenaline flowing, anyone might have acted the same way as Ben did. But Ben will spend some time dwelling on the incident, and he’ll worry that his momentary desire to kill Jordan means that he’s still a murdering monster, just like he used to be before his big psychological breakthrough.

It looks like Ben will consider the incident as a “relapse” and he’ll worry that he’s just the same murderer he used to be. And so he’ll decide that he’s just too great of a risk to Ciara, and that he needs to break up with her. The last thing that Ben would want is to hurt Ciara, and he’ll feel that she’s safer if they go their separate ways.

So, Ben will dump Ciara, who will be devastated by the split. Ciara probably won’t blame Ben for his momentary reaction to Jordan, and she may argue that even though Ben felt like killing Jordan, he ultimately didn’t do so. But it looks like Ben won’t agree, and he’ll go ahead and sever ties with Ciara.

Of course, Ciara will probably get plenty of support from Hope, who will surely be relieved by the split. But Ciara will be miserable without Ben. Do you think that Ben will ever come around? Stay tuned to DOOL and don’t forget to check CDL often for the latest Days of Our Lives spoilers, updates, and news.