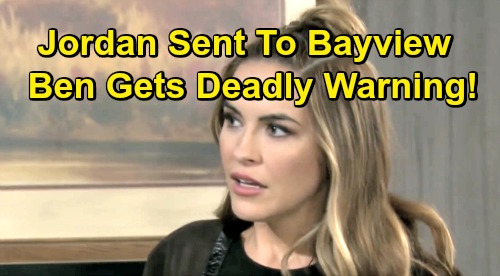 Days of Our Lives (DOOL) spoilers tease that one final faceoff will go down between the formerly crazy Ben Weston (Robert Scott Wilson) and the currently crazy Jordan Ridgeway (Chrishell Hartley). Jordan will try to murder Ben, so Ciara will fight to save him. That’ll prompt Ben to save Ciara and nearly kill his sister in the process. It’ll be a nightmare of a showdown, but everyone will thankfully survive.

Rafe Hernandez (Galen Gering) will end up pulling Ben off Jordan and hauling her down to the police station. That’ll leave Ben and Ciara to have a deep discussion about what just happened. Days of Our Lives spoilers say Ben will make a painful admission. As much as he loves his sister and values everything she’s done for him over the years, Ben will know he could’ve taken her life.

As Ciara listens, Ben will describe the familiar anger and intensity he felt. He’ll suggest that if Rafe hadn’t shown up when he did, Jordan would probably be dead. The idea that he could kill again like he did before will absolutely terrify him. Ben would never want to pose a threat to Ciara or anyone else. He’ll confess that he just lost control when Jordan went after Ciara, who he cares deeply for.

Ciara may downplay the situation and argue that Ben simply came to her rescue. She believes she knows Ben’s heart, so she won’t think he’d take a life if he weren’t defending someone. Ben, on the other hand, won’t be so sure. He’ll start to think maybe Jordan is right about him still posing a threat to society.

Later, Ben will head over to the Salem PD to see Jordan once more. He’ll bid his sister farewell and hope she gets the help she needs at Bayview, where we’ll learn she already escaped from. Days of Our Lives spoilers say Jordan will be upset about Ben’s freedom. She’ll feel like Ben’s the one who needs to be in a padded room, not her.

Before Jordan returns to the mental institution, she’ll make a statement that really hits Ben hard. Jordan will leave Ben with a warning that’ll weigh heavily on his mind. She may argue that if Ben doesn’t listen to her and stay away from Ciara, this will end in disaster. Jordan will contend that Ben only ends up hurting the people he claims to love – just like he did with her at the hospital.

Despite Jordan’s crazy turn during this stint, she’s always been there for Ben in the past. Jordan was his rock for many years, so her words will matter to him. Ben will know on some level that Jordan’s nuts and shouldn’t be listened to. Still, another part of him will feel like there’s some truth to what Jordan’s saying.

Days spoilers reveal that Ben will have to make some tough decisions about Ciara and their future together. As for Jordan, DOOL fans can expect her to be carted off to Bayview. However, Entertainment Weekly reports that Jordan’s storyline is supposed to continue through April.

It sounds like Jordan could make another getaway at some point, so Ben and Ciara will need to keep looking over their shoulders! We’ll give you updates as other Days news comes in. Stick with DOOL and don’t forget to check CDL often for the latest Days of Our Lives spoilers, updates and news.