Days of Our Lives Spoilers: Jordan Tries To Murder Ciara – Ben’s Killer Side Takes Over 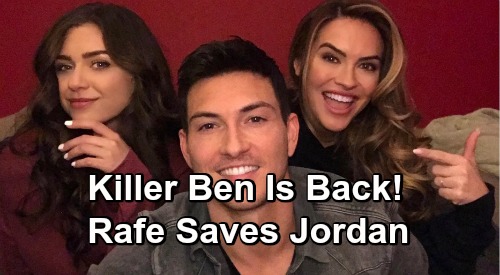 Days of Our Lives (DOOL) spoilers tease that Jordan Ridgeway (Chrishell Hartley) just won’t give up. She keeps ranting about Ben Weston’s (Robert Scott Wilson) obsession with Ciara Brady (Victoria Konefal), but she’s clearly got an obsession of her own. Jordan can’t rest until Ben is no longer a threat to Salem or anywhere else he might torment. She’s even willing to let Ciara die for the greater good!

After Ben saves Ciara from the cabin fire, Jordan will be frustrated and furious. Thanks to Ben and Ciara’s statements to Hope Hernandez (Kristian Alfonso), Jordan’s plan will be blown. She’ll realize this whole framing idea isn’t going to work. If Jordan wants Ben out of the picture, she’ll have to do something far more drastic.

Jordan loves her brother, but not enough to let him hurt or kill anyone else. She’ll determine that murdering Ben is the only way to keep his potential victims safe. Jordan just won’t be willing to let Ben go down his own deadly road again. She’s awfully crazy herself, so she can’t see the positive changes in Ben’s life or the progress he’s made.

Days of Our Lives spoilers say Jordan will don a pair of scrubs and sneak in Ciara’s hospital room. Ben will be visiting Ciara, so Jordan will bash him over the head with something to knock him out. A stunned Ciara will protest, but Jordan will insist she’s doing what has to be done.

DOOL fans can expect Jordan to whip out a syringe and announce her goal. She’ll make it clear that she’s going to end Ben’s reign of terror once and for all. Before Jordan can stick Ben with the fatal drug, Ciara will leap into action. They’ll get into a struggle as Jordan tries to turn the syringe on Ciara to defend herself.

In other words, saving Ben’s life will put Ciara’s life in danger once again. Thankfully, Days of Our Lives spoilers say Ben will regain consciousness just in time. He’ll lunge toward his sister in a beastly rage! Ben’s dark side will take over at the thought of Jordan killing the woman he loves. He’ll feel himself become the animal he was during his necktie killer spree.

Rafe Hernandez (Galen Gering) will intervene before Ben finishes Jordan off, but the whole experience will rattle Ben. He’ll have to wonder if the darkness within him can truly be contained. Days spoilers say this will bring some deep fears to the surface and force Ben to reevaluate his mental state.

It sounds like some gripping scenes are coming up. We’ll give you updates as other Days news emerges. Stay tuned to DOOL and don’t forget to check CDL often for the latest Days of Our Lives spoilers, updates and news.