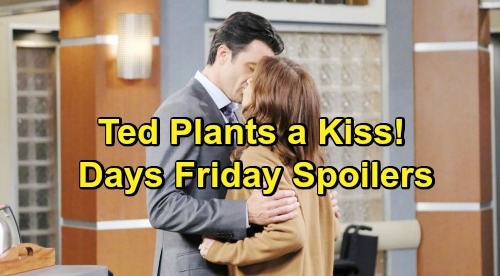 Days of Our Lives (DOOL) spoilers for Friday, February 15, tease that Rafe Hernandez (Galen Gering) will worry about Kate Roberts (Lauren Koslow). She just flatlined in her hospital room, so the situation is growing more serious by the second. Thankfully, Dr. Kayla Johnson (Mary Beth Evans) and her team will leap into action. They’ll get Kate breathing again, so it won’t be long until she’s on the road to recovery.

Meanwhile, Ciara Brady (Victoria Konefal) will rush to Ben Weston’s (Robert Scott Wilson) defense. Hope Hernandez (Kristian Alfonso) just arrived outside the scorched cabin and she’s ready to point the finger straight at Ben. To be fair, he did pull a gun on Hope not too long ago! It’s no surprise that she’s still battling doubts about Ben’s dark side.

However, Ben was simply a desperate man who was willing to take drastic action. He did what he had to do to save Ciara. Once Ciara explains that and insists Ben’s right about Jordan Ridgeway (Chrishell Hartley), Hope will soften a bit. She’ll let Ben and Ciara have share some sweet moments at the hospital later, but more trouble is brewing.

For now, Days of Our Lives spoilers say Jordan will struggle over what she just learned. In an effort to get Charlotte DiMera back, Chad DiMera (Billy Flynn) lied about killing Ben. Jordan wanted Ben locked up, but she’s reeling at the thought of him actually dying. She loves her brother despite her plan to take him down.

In fact, Jordan’s love has partially motivated her twisted and deadly scheme. She can’t bear the thought of someone she cares about behaving so cruelly. Of course, DOOL fans know Ben isn’t the menace he once was. Since Jordan can’t understand that, part of her will be relieved by Chad’s fib.

While Jordan mulls all this over, Days spoilers say Rex Brady (Kyle Lowder) will bump into her. He’ll wonder what’s got Jordan so distraught. It looks like Jordan will offer some vague answers, but Rex will grow increasingly curious when he spots her scar. Jordan will lift her hair up to reveal a wound that’s healed on the back of her head, so Rex will ask what happened.

It seems this is connected to a car crash – perhaps the one that killed Jordan’s pregnant mother many years ago. Unfortunately, Rex will derail his own romantic plans with this distraction. It doesn’t look like he’ll cheat again, but that won’t stop Sarah Horton (Linsey Godfrey) from thinking it’s a possibility.

Other Days of Our Lives spoilers say Chad will finally earn Abigail Deveraux’s (Kate Mansi) forgiveness. She’ll be grateful for his help with Jordan and the opportunity to rebuild their family. Any remaining anger and pain will melt away during “Chabby’s” official reunion!

Back with Hope, she’ll be surprised when Ted Laurent (Gilles Marini) plants a kiss. Hope will wrestle with some complicated feelings, so DOOL viewers won’t want to miss Friday’s exciting episode. We’ll give you updates as other Days news comes in. Stick with the NBC soap and don’t forget to check CDL often for the latest Days of Our Lives spoilers, updates and news.