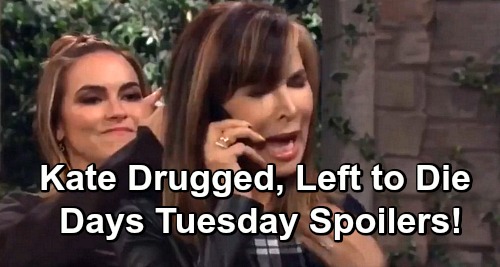 Days of Our Lives (DOOL) spoilers for Tuesday, February 12, tease that Jordan Ridgeway (Chrishell Hartley) will realize there’s a threat to her plan. She’s hoping to frame Ben Weston (Robert Scott Wilson) for two kidnappings and get him locked up. In Jordan’s mind, that’s the only way the people of Salem will ever truly be safe.

However, Kate Roberts (Lauren Koslow) just bumped into Jordan, who dropped all her supplies. It won’t take long for Kate to put the clues together and determine that Jordan knows more than she’s letting on. Jordan will deny any involvement in Charlotte DiMera’s abduction, but Kate will think Jordan must’ve teamed up with Ben. She’ll start to call the police, so Jordan will have to take drastic action.

Days of Our Lives spoilers say Jordan will drug Kate and leave her to die in the park. She’ll believe it’s a necessary casualty, but Rafe Hernandez (Galen Gering) will manage to save Kate on Wednesday’s new Days Episode, February 13. In the meantime, DOOL fans can expect some clashing between Chloe Lane (Nadia Bjorlin) and Brady Black (Eric Martsolf). Her decision to move in with Stefan DiMera (Tyler Christopher) won’t go over well!

Brady will feel like Chloe’s crazy for trusting Stefan enough to live at the mansion with him. He’ll think it’s even crazier that she’s allowing the kids to live there. Nevertheless, Days viewers know Stefan came to Chloe’s rescue recently. She saw his softer side, so she’s willing to let her guard down a bit.

Besides, safety is the priority right now. Chloe believes the DiMera mansion is her best option, so she’ll shut down Brady’s concerns. Over with Gabi Hernandez (Camila Banus), she’ll lash out at Stefan as usual. These two always find something to fight about! Days of Our Lives spoilers say Gabi will be upset about Stefan’s business move, so she’ll unload her anger and hope it prompts some changes.

Stefan will likely stand his ground, which should give Gabi another reason to seethe. She’ll end up working with Brady on a new plot soon, so Stefan’s got more chaos coming up. We’ll give you updates as other Days news emerges. Stay tuned to DOOL and don’t forget to check CDL often for the latest Days of Our Lives spoilers, updates and news.