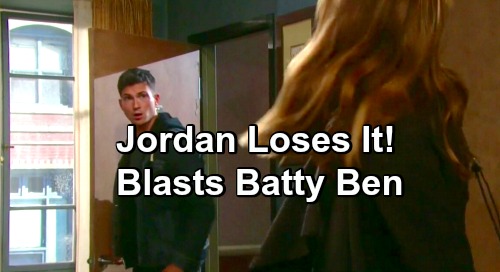 Days of Our Lives (DOOL) spoilers tease that Jordan Ridgeway (Chrishell Hartley) will eventually come face to face with Ben Weston (Robert Scott Wilson). During Jordan’s time off screen, her traumatic past drove her to breaking point and landed her at Bayview. Jordan escaped in hopes of protecting the people Ben might hurt. She plans to make Ben check himself back in the facility.

Jordan is behind Ciara Brady’s (Victoria Konefal) kidnapping and is behind Charlotte DiMera’s disappearance as well. However, Jordan has been scheming long before now.

The Salem PD still doesn’t know who set the cabin fire, but it appears it was Jordan. She may have figured Ciara would be saved before she perished in the blaze, which is exactly what happened.

Then again, Jordan may not have even been sure Ciara was in there when she lit the match and ran. She’s crazy, so there’s no need for Days fans to overthink her logic. The point is Jordan wants Ben locked up permanently. She’s been doing whatever it takes to prove Ben is still dangerous and she will continue her efforts over the next couple weeks.

Ben should get a clue about his insane sister’s behavior, eventually. Days of Our Lives spoilers say they’ll have a tense showdown on a new Days episode, Monday, February 11. Jordan will encourage Ben to see that he poses a threat. She’ll think that if Ben cares about Ciara at all, he’ll head back over to Bayview and let them know he needs help.

Ben won’t be willing to do that, so Jordan will plot a major setup. As the hints start coming together, Ben will realize Jordan’s framing him and it could cost him his freedom. He’ll turn to Chad DiMera (Billy Flynn) for help as he works to free Ciara, find Charlotte and prove his innocence.

Days of Our Lives spoilers say Jordan’s plan won’t pan out, so she’ll be distraught when she bumps into Rex Brady (Kyle Lowder) later. He may not hear the whole story, but he might offer advice that urges Jordan to do the right thing.

Regardless, it’s clear that Jordan’s the one who belongs back at Bayview! DOOL will inevitably put her back there at the end of this shocking storyline.

It sounds like the excitement’s revving up in Salem. We’ll give you updates as other Days news comes in. Stay tuned to DOOL and don’t forget to check CDL often for Days of Our Lives spoilers, updates and news.