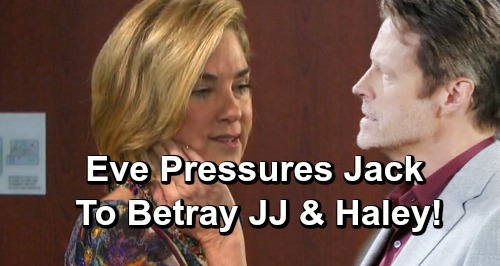 Days of Our Lives (DOOL) spoilers tease that Eve Donovan (Kassie DePaiva) will cause more trouble between Jack Deveraux (Matthew Ashford) and his family. Eve brought an amnesiac Jack back to Salem with one goal in mind: hurt Jennifer Horton (Melissa Reeves) as much as possible. And Eve’s succeeded in that goal so far, as she’s got Jack holed up at the Salem Inn and has been poisoning him against his family.

Eve’s biggest plot so far has been to get Jack to run for mayor of Salem. Eve knows that Jack’s sordid history will become an issue in the campaign, and that this will hurt Jennifer, Abigail Deveraux (Kate Mansi), and JJ Deveraux (Casey Moss). She absolutely loves the fact that Jack’s family will suffer as a result of his running for mayor.

One thing that Eve doesn’t particularly care for is that Jack and JJ have been bonding lately. Jack feels a connection with JJ that he doesn’t feel with Jennifer or Abigail, and he’s sought out JJ for companionship. The two have had beers together, and JJ even confided in Jack about the problems he was having with Haley (Thia Megia).

JJ was so distraught about finding out that Haley was an undocumented immigrant that he told his father all about it, not thinking that this was information that Jack might be able to use against one of his opponents in the mayoral race, Melinda Trask (Laura Kai Chen).

Melinda and Haley are sisters, and it would likely sink Melinda’s campaign if it were to get out that the former DA’s sister was in the country illegally.

According to Days spoilers, Eve is going to find out about Haley’s immigration status, and she’ll pressure Jack to use that information against Melinda in the campaign. Of course, Jack will know that if he does use the information, he’ll compromise his relationship with his son.

It will be a huge dilemma for Jack, but it seems that Eve will be relentless in encouraging Jack to use the information to his advantage.

Jack will have a big decision on his hands…use the information and upset his family, or keep the information to himself and upset Eve. What do you think he’ll do? Stay tuned to DOOL and don’t forget to check CDL often for the latest Days of Our Lives spoilers, updates, and news.