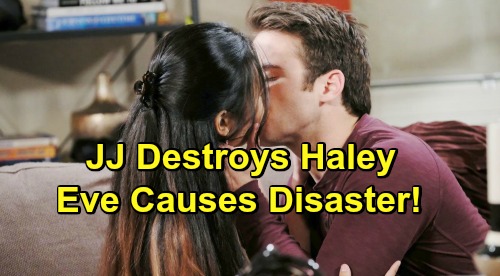 Days of Our Lives (DOOL) spoilers tease that JJ Deveraux (Casey Moss) and Haley Chen (Thia Megia) will work through a bump in the road. They’ll ultimately move past Wednesday’s argument and get their relationship back on track. They’re just pals right now, but JJ admitted he’s hoping Haley will be his girlfriend eventually.

JJ opened up to Jack Deveraux (Matthew Ashford) about that during some father-son bonding. They shared some nice moments and will share even more sooner or later. Jack assured JJ that he’d be there for him whether he gets his memories back or not. He’s got a nice connection with JJ, even if he can’t remember him yet.

Jack will inevitably get his hands on the formula and experience total recall at some point. Unfortunately, he should stir up trouble for his family in the meantime. DOOL spoilers say JJ will allow himself to trust Jack. He’s looking at his father’s face and hearing Jack’s familiar voice. It’s easy for JJ to think of Jack as the same man he knew and loved, but that’s not really the case right now.

Jack can’t remember who he was, so he just isn’t the same guy. That’s why he’ll make a huge mistake by betraying JJ’s trust. Days of Our Lives spoilers state that JJ and Haley will lock lips on February 8. That’ll deepen their bond and set the stage for disaster.

The closer JJ gets to Haley, the more he’ll worry about her situation. He’ll confide in Jack, so it looks like he’ll confess that Haley’s an undocumented immigrant. Since Jack wants to become mayor and Melinda Trask (Laura Kai Chen) is one of his competitors, it’s dangerous to put this secret in his hands.

That’s especially true since Eve Donovan (Kassie DePaiva) is pulling the strings! She knows just how to get Jack to do what she wants. It appears Jack may end up blabbing the secret to Eve, so another round of manipulating is looming.

During the week of February 11-15, Days of Our Lives spoilers say Eve will push Jack to protect his son. She may argue that Jack should spill Haley’s secret to get her away from JJ. Eve may suggest that JJ will just screw up and go down for helping her. Of course, Eve’s real motive would be causing a scandal to tank Melinda’s campaign.

Regardless, JJ will regret trusting Jack and Haley will regret trusting JJ. Days of Our Lives spoilers say Haley and JJ will face some devastating blows. She’ll deal with deportation fears, but she’ll be furious with JJ no matter what. It’s going to take some serious work to get back to where they started.

It sounds like JJ’s love life will get awfully messy! We’ll give you updates as other Days news comes in. Stay tuned to DOOL and don’t forget to check CDL often for the latest Days of Our Lives spoilers, updates and news.