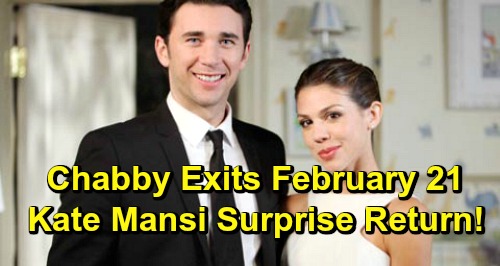 Days of Our Lives (DOOL) spoilers tease that two NBC stars are speaking out about their upcoming exits. Their joint departure will lead to “Chabby” living happily ever after off screen for a while. Kate Mansi (Abigail Deveraux) and Billy Flynn (Chad DiMera) are eager for Days fans to see their final episode. Chad and Abby’s last airdate has just been revealed, so let’s take a look at all the details.

You can expect Abigail and Chad to say farewell to Salem on Thursday, February 21. This will conclude Mansi’s short-term stint and mark the end of Flynn’s lengthy run. “Chabby” lovers will hate to see them go, but the actors insist a fantastic sendoff is coming. That should soften the blow of this tough goodbye.

On Twitter, Flynn and Mansi addressed their looming departures. After Soaps She Knows tweeted about “Chabby’s” final airdate, Flynn was quick to chime in. “You won’t want to miss it,” Flynn said. He added a winking smiley face to let viewers know it’d be extra special.

Mansi retweeted Flynn’s tweet and added a comment of her own. “You certainly won’t,” Mansi said. She was echoing the idea that this is worth tuning in for. Mansi even sent out another tweet promising some behind-the-scenes content once the episode airs. “I cannot wait to show you all the #bts footage I took for that episode- I’m bursting at the seams!!!!!”

Days of Our Lives spoilers say Chad and Abigail’s last day in Salem will be bittersweet. They’ve had a rough time ever since Stefan DiMera (Tyler Christopher) came to town, but at least their love will carry them through in the end. Even though we won’t have “Chabby” on screen anymore, it’s nice when a couple can ride off into the sunset together.

Plus, Abigail and Chad might return down the road. Mansi has been spotted on set since her departure, which happened a few months back. DOOL tapes pretty far ahead, so it looks like Mansi may have already filmed another appearance or two. She may be back for Caroline Brady’s (Peggy McCay) funeral, which we know will have a huge turnout thanks to Days of Our Lives spoilers.

Soap characters always come and go, so we can hold out hope for Chad and Abigail’s eventual return! It’d be great to get them back in the mix after resting the characters for a bit. We’ll give you updates as other Days news comes in. Stick with DOOL and don’t forget to check CDL often for the latest Days of Our Lives spoilers