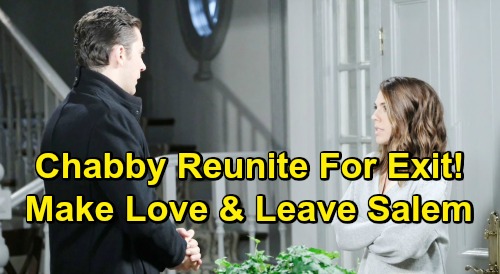 Days of Our Lives (DOOL) spoilers tease that a team effort will work to Chad DiMera’s (Billy Flynn) advantage. After Charlotte DiMera goes missing, Chad will do everything in his power to find her – including join forces with an enemy. Ben Weston (Robert Scott Wilson) is one of Chad’s least favorite people, but Chad will realize they’ll have to work together to save their loved ones.

DOOL fans can expect Ben and Chad’s strategy to pay off. They’ll be responsible for the rescue of Ciara Brady (Victoria Konefal) as well as Charlotte. Once Jordan Ridgeway’s (Chrishell Hartley) plot is foiled, Chad can scoop up his daughter and make a wonderful reunion happen. He’ll be eager to place Charlotte back in Abigail Deveraux’s (Kate Mansi) arms.

Naturally, Chad will be relieved that Charlotte’s safe and home with her parents again. That’s the priority here. However, Chad will hope for another round of great news in the back of his mind. Days viewers will recall that Chad gave Charlotte to Stefan DiMera (Tyler Christopher) during all the paternity deception. Chad bough Gabi Hernandez’s (Camila Banus) lies, so he assumed Abigail needed real mental help.

That wasn’t true at all, so Abigail was furious for many reasons. It was a deep betrayal since Chad believed his ex over the love of his life. Chad also robbed Abigail of those precious first weeks with her baby. She was locked up in Bayview and left to fret about Stefan’s grip on her daughter. It wasn’t right for Chad to use Charlotte as a pawn in that mess.

Nevertheless, Chad feels terrible and wants a fresh start. He’ll get his wish after he brings Charlotte back to Abigail. She’ll be overjoyed enough to plant a steamy kiss and forgive Chad at last. Days of Our Lives spoilers say Chad and Abigail will make love soon after. It sounds like the NBC soap will really kick things in high gear.

Of course, we know that’s because Chad and Abigail are both on their way out. Days of Our Lives is putting all the pieces in place for the perfect “Chabby” exit. Once this reunion’s official, it won’t be long until something leads Chad and Abigail out of town. Maybe it’ll be a job offer for Chad in a new city. Abigail might think it’d be good for them to get away from Salem for a while and focus on their family.