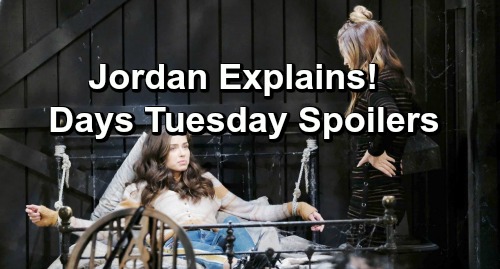 Days of Our Lives (DOOL) spoilers for Tuesday, February 5, tease that Chloe Lane (Nadia Bjorlin) will be overwhelmed with gratitude. Stefan DiMera (Tyler Christopher) really stepped up for her during that dangerous faceoff at Doug’s Place. He managed to get rid of one thug and stabbed another. Of course, the wounded thug managed to fire a shot as payback, but it thankfully won’t result in serious injuries.

Chloe will control the bleeding in Stefan’s shoulder and let him know she appreciates his bravery. She’ll definitely spread the word about Stefan’s heroic efforts. Days spoilers say Chad DiMera (Billy Flynn) and Kate Roberts (Lauren Koslow) will get updates soon enough. They’ll be glad that Chloe’s OK, but they may be a little disappointed that Stefan didn’t bite the bust!

Nevertheless, Stefan is going to be just fine. In fact, some good will come out of the danger since Stefan and Chloe will grow closer. Meanwhile, Days of Our Lives spoilers say Hope Hernandez (Kristian Alfonso) will struggle to find Ciara Brady (Victoria Konefal). Ben Weston (Robert Scott Wilson) assured Hope that he didn’t kidnap the woman he loves, but Hope certainly doesn’t trust him.

As Hope tries to figure out her daughter’s whereabouts, Ciara will feel like her problems are over. Jordan Ridgeway (Chrishell Hartley) just appeared at the cabin, so Ciara thinks Ben’s sister will save the day. What she doesn’t realize is that Jordan broke out of Bayview and was behind the abduction herself.

Jordan believes Ben will just resort to violence again, so she’s trying to keep Ciara out of harm’s way. Days of Our Lives spoilers say Ciara will beg Jordan to untie her and help her get out of there. When Jordan refuses and leaves again, Ciara will determine that Ben’s big sis is almost as crazy as he used to be. She’ll fret about how she’s going to escape and get back to the people she cares about.

Other DOOL spoilers state that Julie Williams (Susan Seaforth Hayes) will have a chat with Abigail Deveraux (Kate Mansi). She’ll insist that Chad is deeply sorry for his actions and deserves forgiveness. Abigail still won’t be ready, but a painful ordeal is about to change her mind. Charlotte DiMera will be kidnapped later this week, so that’ll shake up “Chabby’s” world and bring some huge shifts in their relationship.

It sounds like some exciting scenes are coming up. We’ll keep you posted as other Days news emerges. Stay tuned to DOOL and don’t forget to check CDL often for the latest Days of Our Lives spoilers, updates and news.