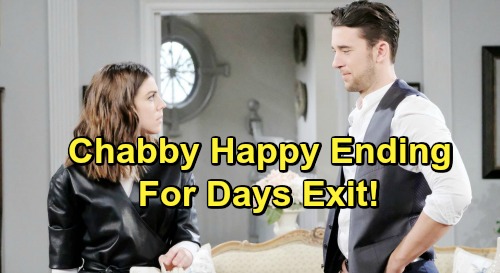 Days of Our Lives (DOOL) spoilers tease that Kate Roberts (Lauren Koslow) will deliver a heartfelt plea. She’ll go to Abigail Deveraux (Kate Mansi) next week, January 14-18, and insist that Chad DiMera (Billy Flynn) deserves forgiveness. Kate won’t expect Abigail to forgive her for what she’s done. She doesn’t expect that from Chad either. Kate will simply want to make things right between the once happy couple.

Even if Kate can’t repair the damage in her own relationship with Chad, she’ll think there’s hope for Chad and Abigail’s future. It’s easy to see why Abigail was unwilling to just let the past go. Chad hurt Abby deeply and even handed her baby over to a monster. Little Charlotte DiMera was in Stefan DiMera’s (Tyler Christopher) clutches and that’s just not OK.

Chad also blindly believed Gabi Hernandez’s (Camila Banus) claims, schemed behind Abigail’s back and left her locked up in a mental institution. He deserves to suffer a bit for all of that. At the same time, Chad wasn’t behaving maliciously. He truly believed Abigail needed help and he wanted to give it to her. Chad didn’t handle any of this correctly, but Kate will think his heart was in the right place.

Days of Our Lives spoilers say Abigail will listen to Kate’s plea for Chad, but she may dismiss the advice. If Abigail takes Chad back, it’ll be her decision and no one else’s. Abigail certainly won’t do it just because Kate thinks she should. However, the lingering love is undeniable. It won’t be long until Abigail’s letting her walls down again.

DOOL fans can expect a kiss between Chad and Abigail next week. Days of Our Lives spoilers say Chad will be overjoyed as he gets closer to a real reunion. Abigail will remain hesitant to open her heart all the way, but Chad will make it tough to resist. He’ll pull out all the stops to show Abigail that their connection is still there. Chad won’t want to let their love story slip away when more chapters await.

It sounds like this is all building to Abigail and Chad’s “happily ever after” exit. Since Mansi’s stint is short-term and Flynn is also leaving the show, Days of Our Lives will likely just have them ride off into the sunset together. Will spring bring a bittersweet joint “Chabby” departure?

Days spoilers say some great material will play out between now and then, so stay tuned. We’ll give you updates as other news comes in. Stick with DOOL and don’t forget to check CDL often for the latest Days of Our Lives spoilers, updates and news.