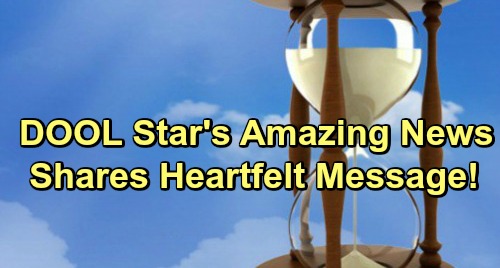 Days of Our Lives (DOOL) spoilers reveal that one former NBC soap star is finding success away from his old soap home. Many DOOL fans were disappointed when Christopher Sean made the decision to leave the role of Paul Narita. It’s always tough to say goodbye, especially when you’re saying it to a sweetheart of a character like Paul! He was one of the best guys around and he’s certainly missed.

However, Days viewers were also excited to see what the future might hold for Sean. It turns out he’s already achieving great things. You might’ve heard about Sean’s animated series over on Disney Channel. He’s the voice of the lead role in Star Wars Resistance. Sean brings life to Kazuda Xiono, a young pilot who’s on a top-secret mission to investigate a spreading threat in the galaxy.

The first season was a hit for Disney, so they’ve already given the greenlight for the second season. Sean shared the good news through his Instagram account. He’s clearly thrilled about this role and the chance to keep the fun going for Star Wars Resistance fans.

Sean posted a heartfelt message to fill everyone in and explain what this part means to him. He said, “So excited to announce!!! We are renewed for Season 2!! This show is only getting better and better :) definitely tune in everyone! I’m so proud to be a part of this team.”

Of course, Sean is also grateful for the opportunity to take “huge steps forward” for Asian Americans in entertainment. He recognizes that this is a big deal and wants to keep efforts for inclusion going strong. “Honored to be representing #AsianAmericans in a Galaxy Far Far Away… #Inclusion Matters. We are all equal, not one more important than the other,” Sean said.

What about Days of Our Lives and Paul’s future? Would Sean ever consider returning? He certainly doesn’t seem to be ruling it out. When Sean’s final scenes aired, he put “Until Next Time” in his Instagram farewell message. There’s a possibility Paul will pop up at some point, even if it’s just for a visit.

So excited to announce !!! We are renewed for Season 2!! This show is only getting better and better :) definitely tune in everyone! I’m so proud to be a part of this team. Huge steps… https://t.co/aBNQ5PM9R4