Days of Our Lives Spoilers: Xander Off The Hook For Marlena’s Shooting – See Shocking Reason Why 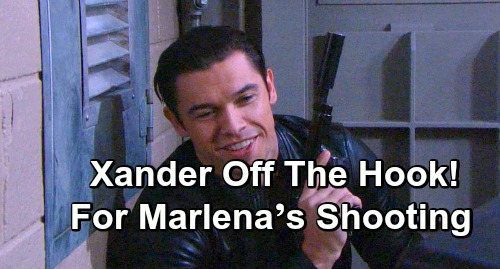 Days of Our Lives (DOOL) spoilers tease that Xander Kiriakis (Paul Telfer) is taking a real risk by showing his face again in Salem. The last time Xander was in Salem was for Marlena Evans (Deidre Hall) and John Black’s (Drake Hogestyn) wedding. Xander was hiding in the shadows while Kristen DiMera (Stacy Haiduk) caused havoc, and Xander shot Marlena, nearly killing her.

Of course, that shooting set off a terrible chain of events. Sami DiMera (Alison Sweeney) was arrested for the shooting, and Marlena was nearly taken off life support. Xander really caused a mess, and there are many people who’ll be gunning for his arrest and conviction when they find out he’s alive and in Salem.

But it seems that Xander isn’t that worried about getting caught and hauled in for Marlena’s shooting. He’s been running around Salem and conspicuously hanging out at the Kiriakis mansion. It’s as if he knows that he’s not going to go down for the crime.

Still, Days spoilers say that the Salem PD will indeed be quite interested to learn that Xander is alive, and they’ll have every intention of arresting him for the attempted murder of Marlena. Eli Grant (Lamon Archey) and Lani Price (Sal Stowers) will think they have a solid case, especially since the shooting was captured by surveillance cameras.

Previously, John and Marlena saw the surveillance footage, and Xander could clearly be seen pointing the gun in Marlena’s direction on the day of the wedding.

But when Eli and Lani go to review the footage, they’ll be horrified to discover that the recording has been destroyed. The rock solid evidence they had against Xander will be gone, and so will the case against him.

Days spoilers say that John will deliver the bad news to Marlena that the Salem PD’s case against Xander has fallen apart, and Marlena will be beside herself. But there won’t be much they can do about it, and Xander will likely remain a free man for the foreseeable future.

Xander always seems to have every angle covered. Do you think he’ll ever go down for any of his crimes? Stay tuned to DOOL and don’t forget to check CDL often for the latest Days of Our Lives spoilers, updates, and news.