BY Heather Hughes on February 14, 2019 | Comments: one comment
Related : Days of Our Lives, Soap Opera, Spoiler, Television, The Young and the Restless 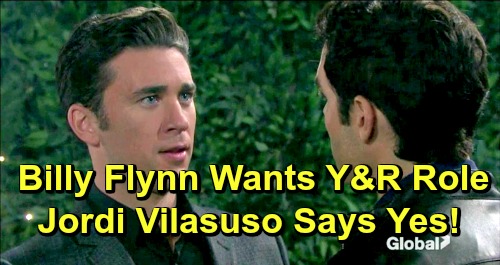 Days of Our Lives (DOOL) spoilers tease that Billy Flynn’s (Chad DiMera) exit is rapidly approaching. He’ll be leaving the role of Chad and his TV soul mate’s going with him. Kate Mansi is also departing as Abigail Deveraux, although she’ll be Abigail DiMera again before she hits the road. After Chad and Abigail remarry on February 21, they’ll ride off into the sunset together and bid fans farewell.

However, it sounds like Flynn wouldn’t mind finding a new soap home. Some intriguing tweets show Flynn would be on board with joining the cast of The Young and the Restless. In response to a question about Flynn possibly landing on the CBS soap, Flynn tagged a fellow DOOL alum and current Y&R star.

Flynn said, “Well that could be interesting ay @JordiVilasuso?” Of course, Jordi Vilasuso portrayed Dario Hernandez on Days of Our Lives. He was recently mentioned by Eve Donovan (Kassie DePaiva), so he should be fresh in fans’ minds. Vilasuso now plays Rey Rosales over on The Young and the Restless, but he’d love it if his former Days costar traded Salem for Genoa City, too.

After that tweet about it being interesting, Vilasuso replied, “Very…” He added a flexing muscle emoji along with a high five one to show his approval. Naturally, Days fans who hate to see Flynn leave are already trying to pick out a new Y&R role for him! Some viewers even suggested Flynn as an Adam recast, although we’d say he’s a bit too young and not quite the right fit for that part.

Still, it’s easy to imagine Flynn playing some young, smug executive who develops a rivalry with Kyle Abbott (Michael Mealor). Flynn might be a pretty good love interest for Summer Newman (Hunter King). He knows how to play a confident rich guy and Summer’s really into that type of man!

Other Days watchers piped up that they’d prefer to see Flynn on General Hospital. GH certainly likes to scoop up discarded cast members from other soaps, so that’s a possibility. Even The Bold and the Beautiful might be looking for someone like Flynn at some point. He’s probably keeping his options open!

Nevertheless, plenty of Days viewers are hoping Flynn will return as Chad eventually. Once the character is rested for a while, the NBC soap could definitely get Chad back in the mix. Days of Our Lives spoilers say more hot drama’s ahead no matter what, so stay tuned. We’ll give you updates as other news comes in. Stick with DOOL and don’t forget to check CDL often for the latest Days of Our Lives spoilers, updates and news.

Before @billymflynn says goodbye to @nbcdays, join us for a look back at Chad’s history in Salem —> https://t.co/Ey47Ywrti8 #DOOL pic.twitter.com/SR1OuJ1O4q